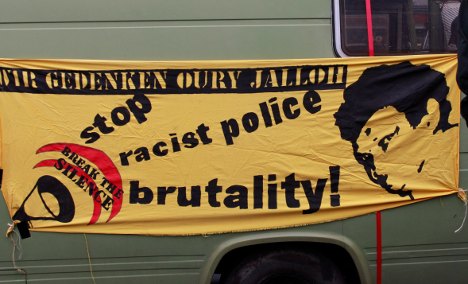 The rally on Saturday afternoon was delayed by police who tried to confiscate a banner which read, “Oury Jalloh – it was murder” – an allegation which was repeated in chants by the crowd.

Jalloh, a 21-year-old man from Sierra Leone died on January 7, 2005 in a fire in a Dessau police cell, the circumstances of which have never been properly explained.

Around 200 people gathered on Saturday afternoon to demand a full explanation of his death. Two police officers were acquitted of negligent manslaughter of Jalloh in 2008, but one of the officers was again charged in the case last January – a verdict is expected soon.

Dessau’s police chief Kurt Schneiber said his officers had wanted to check whether the allegation that Jalloh’s death was murder could be regarded as defamation – although demonstration organiser Mouctar Bah said the same slogan had been used for years without any protest.

Bah was injured during the demonstration and was taken, unconscious, to hospital. He later accused the police of using excessive force, as did the Green Party which said that if the banner talking of murder was defamatory, it was a matter for the courts, not the police.

The party said it would bring up the matter in the Saxony-Anhalt state parliament’s interior policy committee.