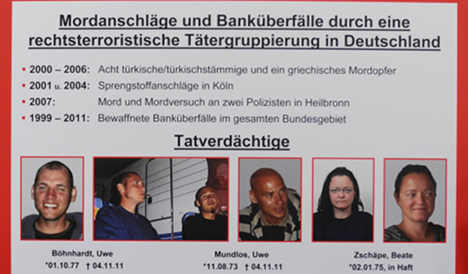 State criminal authorities are looking into whether the National Socialist Underground (NSU) attempted to kill a Duisburg man in December 2003, the Westdeutsche Allgemeine Zeitung (WAZ) reported Saturday. Prosecutors confirmed that the state Office of Criminal Investigation was investigating the matter.

In the Duisburg murder attempt, the perpetrators had positioned a gun near the restaurateur’s car and rigged it with a wire connected to the vehicle. When the man sat down in the driver’s seat, it triggered the weapon, which went off, shattered the car’s window and seriously injured the victim in the shoulder.

He was with a friend, who drove him to a hospital, WAZ reported.

The Zwickau-based NSU was uncovered last November when two of it key members were found dead of apparent suicides and a third leader, Beate Zschäpe, turned herself in to police. Several others have since been arrested.

In addition to 10 murders, the group has also been accused of 14 bank robberies and two attacks involving explosives. Additionally it is suspected in the killing of a rabbi in Switzerland.