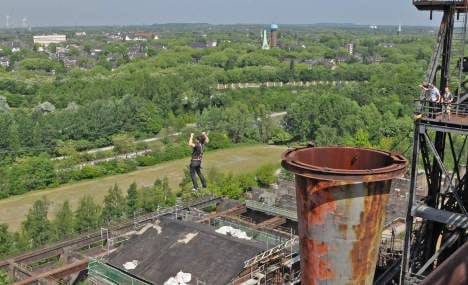 From my lofty vantage point, the panoramic view over the Ruhr Valley to Duisburg and beyond is breathtaking. Derelict factories – rusting, soot-stained hulks – pepper the surprisingly verdant landscape. Chimneys rise like cathedrals; proud relics of the region’s industrial powerhouse past.

In a moment of temporary insanity I have agreed to embark on a group climbing course at the Landschaftspark Duisburg-Nord, an old ironworks-turned-adventure park, in an attempt to confront a life-long fear of heights.

Several years ago I froze just metres from the summit of a Scottish mountain. There seemed to be too much sky, and too little mountain to cling on to. Weak-kneed and woozy, I couldn’t go on.

So I was a little apprehensive earlier in the afternoon in the Ruhr valley, when the climbing instructors led us up through the wrecked bowels of the factory, higher and higher, via a series of death-defying obstacles and increasingly hairy wire-walks, to the expedition’s zenith: the top of a decrepit blast furnace, 50 metres high. A steel rope spans the yawning chasm across to a second furnace. Apparently we’re going to walk across it. My mouth is suddenly desert-dry.

Until 1985 the Landschaftspark was a sprawling ironworks belonging to industrial behemoth ThyssenKrupp. In the late 1980s the Ruhr district, once the beating heart of Germany’s economic miracle of the 1950s and 1960s, was blighted with severe unemployment and poverty after the collapse of the coal-mining industry. The steel and iron crisis of the 1970s had also taken its toll and many factories were driven out of business.

The smog-infested countryside bore the scars of environmental contamination as the empty industrial work-yards slowly decayed into brownfield sites in urgent need of restoration.

As Stephan Haas, a tour guide at the Landschaftspark since 2003, puts it, “the Ruhr was dying – something had to be done.”

A 10-year urban regeneration programme, the International Building Exhibition (IBA) Emscher Park, was set up in 1989 by the state government of North Rhine-Westphalia. The grand plan was to encourage the ecological, economic, and urban revitalization of the Ruhr Valley and the Emscher River: to breathe new life into an area saddled with its abiding reputation as Germany’s ugly industrial armpit.

The Landschaftspark was one of the IBA Emscherpark’s 100+ architectural and urban planning projects spread over 19 cities and municipalities of Germany’s largest metropolitan area.

Since opening in 1994 the park, imaginatively landscaped by Bavarian-based architects Latz + Partner, has proved to be hugely popular with local people who use it as an esoteric, 24/7, green space to walk their dogs, cycle or gambol among the dilapidated ironworks with their children.

Nature has reclaimed large parts of the two-square-kilometre site, with rose gardens planted in former ore-hoppers and trees sprouting up and through corroded furnaces.

“There are around 450 different species of wild plants in the park,” says Haas. “But the skyline is definitely still an industrial one.”

Indeed, the atmosphere of the landscape park is eerie, post-apocalyptic – like something from the pages of a JG Ballard novel. There is an ugly beauty to the union of man-made concrete and steel with the creeping advance of soft local flora.

But it works – both as a tranquil urban nature park and as an awe-inspiring piece of industrial archaeology; the whole representing what might be described as a Gesamtkunstwerk, or total art work. Decay and growth interact in a series of still-lifes which tell the story of the plant’s past and present functions.

The vast, hangar-sized Kraftzentrale – in a previous life an old gas power station – and the smaller Gebläsehalle – which once produced wind for smelting the iron in the furnaces – act as unique venues for fairs, exhibitions, theatre performances and classical concerts.

Even more dramatically, Europe’s largest artificial diving centre is housed in a huge gasometer, flooded with 21 million litres of water. Illuminated at night with kaleidoscopic spotlights, it looks like it landed from outer space onto the set of a Mad Max movie.

In 2010, the Kohlenpott, as the Ruhr region is known colloquially, received a much-needed boon when it was named the European City of Culture, the first time the distinction had gone to an area rather than a city. The year-long programme of art, music and theatre events engendered a feel-good factor across the depressed area.

The Landschaftspark itself enjoyed a spike in visitors, welcoming 750,000 people through its crumbling gates in that year.

But I don’t care about that much now. I have more important things to contemplate. My head is scrambled eggs. A feeling of nausea rises from my feet as I gaze over the edge of the top platform of the blast furnace down through a tangled mess of abandoned factory.

‘It’s windy up here,’ I hear myself think as I watch the wire sway gently in the breeze. When the climbing instructor offers me last minute advice his voice sounds like he’s speaking underwater.

For courage, I summon to mind French funambulist Philippe Petit, who famously walked a tightrope between the Twin Towers of New York’s World Trade Center. Obviously his feat was on a far greater scale, and he wasn’t attached to a second wire by a harness and carabiners, but thinking of his audacious stunt helps focus my mind as I step gingerly off the precipice and tiptoe into the gaping void.

Edging across the steel rope, like a blind man tapping along a kerbstone with a stick, a sickening jolt of vertigo rudely spoils my enjoyment of the spectacular Ruhr Valley vista. But, as gusts of wind whoosh through my hair, I feel electrifyingly alive.

I wouldn’t describe my brief dalliance with funambulism as ‘fun.’ I’m still terrified of heights. But I did it. And I’ll never have to do it again. Next time I’ll take a leisurely stroll round the Landschaftspark. I’ll hang out, instead of hanging on for dear life.