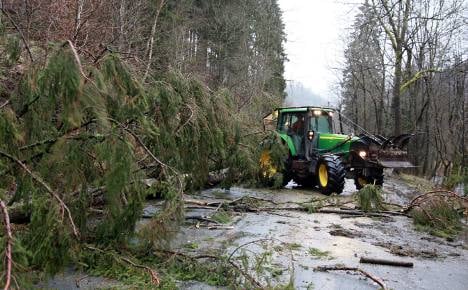 In North Rhine-Westphalia, trucks were blown over by winds reaching speeds of over 100 kilometres per hour. One unfortunate family had their roof destroyed by a falling tree and several roads have been blocked due to excessive amounts of debris on the tarmac.

Up north, coastal regions were battered by huge waves and ferry passengers had to wade through flood water to disembark.

Near Hannover, an infant in a pram was blown into a canal by strong winds. His mother jumped in both survived unharmed.

The stormy weather did, however, produce an especially low tide on many of the country’s beaches, which, combined with dramatic cloud formations, lead to a beautiful sunrise in some areas.

Meteorologists at the German Weather Service (DWD) have forecast another stormy night on Thursday and preparations, such as felling unstable trees, are under way in several states as winds of over 100 kilometres per hour are feared.