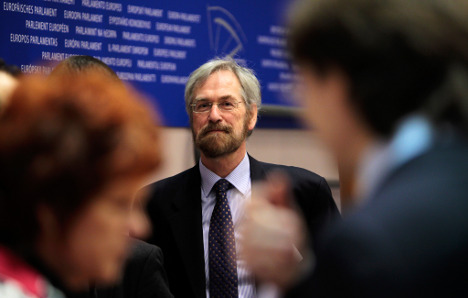 The ECB said executive board member Peter Praet of Belgium would be taking over as the head of its economics department, succeeding Jürgen Stark of Germany, who stepped down at the end of 2011.

Praet, who turns 63 later this month and has been a member of the ECB’s executive board since June 2011, “will be responsible for economics, human resources, budget and organization” under a redistribution of responsibilities following the changeover of two board seats, the ECB said in a statement.

The decision came as a surprise since two incoming board members, Jörg Asmussen of Germany and Benoit Coeure of France, had been seen as the top rival candidates to take over the key economics portfolio.

Asmussen, however, will be responsible for international and European relations, meaning he will be the ECB’s representative at international meetings and attend meetings of the so-called Eurogroup and ECOFIN.

He would also be responsible for legal services and overseeing the building of the ECB’s new premises and the central bank’s permanent representation in Washington.

Coeure will take charge of information systems and market operations.

The other three members of the six-member board – which is responsible for the day-to-day running of the ECB – are bank president Mario Draghi of Italy, vice-president Vitor Constancio of Portugal and Jose Manuel Gonzalez-Paramo of Spain.

Both Berlin and Paris had laid claim to the coveted economics portfolio in recent months amid deepening differences over the role the ECB should take in the eurozone debt crisis.

Ever since the shock announcement in September that Stark was leaving early – he was the ECB’s economist since 2006 and his contract would normally have stayed to May 2014 – Germany had assumed its number two at the finance ministry, Jörg Asmussen, would automatically take over.

But Paris threw its hat into the ring in November in the person of Coeure, chief economist at the French economy and finance ministry and number two at the French treasury.

Ever since the ECB was set up, the position of chief economist has been held by a German – first Otmar Issing and then Stark.

However, the rule is not set in stone and, according to the ECB’s statutes, appointments are not made according to nationality, but expertise and competence.

Furthermore, the distribution of the different portfolios on the executive board is not tied to a specific seat, so Asmussen was not guaranteed to assume the position of chief economist automatically.

Nevertheless, Berlin was keen to retain that particular post in order to cement the ECB’s strong anti-inflation credentials it inherited from the powerful German central bank, the Bundesbank.

Perhaps significantly, Praet was actually born in Germany, even he if holds Belgian nationality.

Praet holds a doctorate in economics from Brussels university, was chief economist at Fortis Bank and then chief of staff for the Belgian finance minister before serving as executive director of the National Bank of Belgium between 2000 and 2011.

The tug-of-war for the post of chief economist highlights the increasingly diverging views of Paris and Berlin over the ECB’s role in fighting the sovereign debt crisis that is threatening to push the world into recession.

France wants the ECB to become a lender of last resort, with the firepower to prevent debt-ridden eurozone members from falling victim to the bond markets.

But Germany is vehemently opposed, scarred by its experiences between the two world wars when its central bank printed unlimited amounts of money to stave off an economic slump, resulting in hyperinflation and the eventual rise of Nazism.

This time around, in addition to inflation concerns, Berlin is worried that allowing the ECB to ride to the rescue will reduce the incentive for fiscally recalcitrant states to take the tough medicine needed to stabilize their public finances.