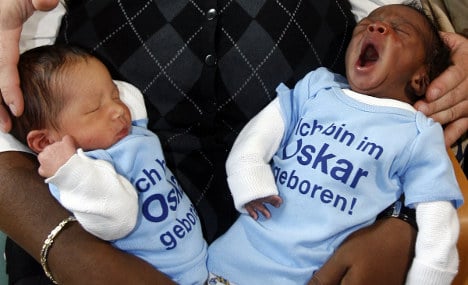 According to a report in the Bild newspaper, 40-year-old dentist’s assistant Grit Funke and her Nigerian partner were completely taken by surprise at the birth.

“First came a light girl, and then out popped a dark girl!” the happy mother told the paper. “The midwife couldn’t believe it either.”

“My boyfriend and I didn’t actually want any more children,” Funke told the paper. “We already have a son together, and I have two boys from my first marriage. But then we found out about the pregnancy, and then came the news that it would be twins.”

The two Funke girls, named Leonie (white) and Louisa (black), are both healthy, and Funke says she has already identified differing character traits. “Louisa is a lot quieter and undemanding and sleeps longer,” she said. “I always say that’s the sunny African genes.”

“I’m looking forward to the looks we get from people on the street when they’re older and the whole family goes for a walk,” she added. “I suppose a few people will be a bit confused.”

There have been two other instances of black and white twins in Germany in recent years, one in Berlin in 2008 (pictured above), the other also in Leipzig in 2005.