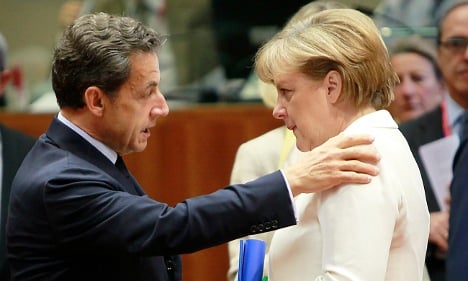 The two leaders have been at the forefront of efforts to tackle the eurozone debt crisis and have met regularly ahead of EU summits in recent months.

In New Year’s Eve messages, both leaders warned of a difficult year ahead for the battered single European currency after the market maelstrom of 2011.

Merkel warned that “the path to overcome (the crisis) remains long,” while Sarkozy said the year was “full of risks.”

At the last summit in December, leaders from 26 of the 27 EU member states agreed to back a Franco-German drive for tighter budget policing in a bid to save the eurozone.

After Britain, which does not use the euro, blocked changes to an EU-wide treaty, the other 26 EU states signalled their willingness to join a “new fiscal compact” imposing tougher budget rules.

The accord, which is to include automatic sanctions that can only be blocked by a majority of powerful states, aims to end the past practices of overspending considered responsible for the two-year debt crisis ravaging Europe.

Merkel and Sarkozy were satirised over New Year’s Eve by a television station which put them into the cult classic skit “Dinner for One”, renaming it “The 90th Euro Rescue Summit, or “Euros for No One” and portraying Sarkozy as the drunk butler to Merkel’s deluded mistress.