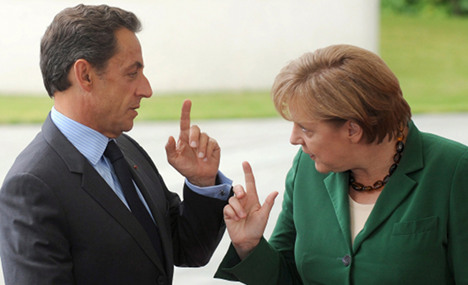 Renamed “The 90th Euro Rescue Summit or Euros for No One”, the sketch features new dialogue too.

Merkel follows the original Miss Sophie in assuming her friends are there – but talks of former Greek Prime Minister Georgios Papandreou and former Spanish Prime Minister Jose Luis Rodriguez Zapatero. She also reprimands an absent British Prime Minister David Cameron that German would be spoken at the dinner.

True to the original, Sarkozy the butler drinks for all his mistress’ guests and gets increasingly drunk, earning the warning from Merkel, “Nicolas, think of your credit rating!”

At the end he helps her upstairs for what in the original is referred to as “the same procedure as every year” and in the satirical version would be conducted without eurobonds – and while the butler promises Sophie to do his best as ever, Sarkozy promises to give Merkel her his “triple A”.

The three-minute clip – in German – has been watched more than 200,000 times on YouTube since being posted there just before Christmas.

The original is a cult hit in Germany, broadcast every New Year’s Eve and watched each year by millions.