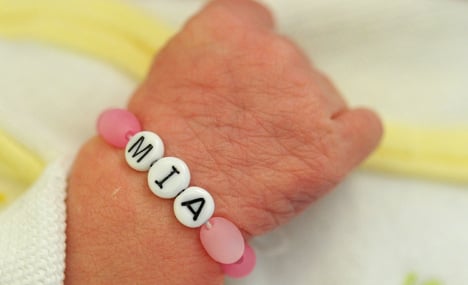 Knud Bielefeld, a researcher in Schleswig-Holstein this year analysed 162,943 birth records – about a quarter of all births in Germany – from state offices, birthing centres and other places were records are kept.

Bielefeld compiles his list of top names each year and puts them on his website, beliebte-vornamen.de. Last year’s favoured name for girls was also Mia, although it was Leon for boys, according to Bielefeld.

Named starting with L remained popular this year with Lea, Leon, Leonnie, Lukas and Luis among the top ten choices.

Popular names, influenced by celebrities or social trends, can quickly go in and out in and out of style. Kevin, for instance, was among Germany’s most popular names some 20 years ago, but plunged off the list it became associated with the lower class. A term was even coined for those poor souls afflicted with the name: Kevinismus.

There is no official list of popular baby names, but the government-funded Association for the German Language also releases its own list of top names each spring.

On its 2010 list it said Maximilian and Sophie were the most popular baby names that year. Those names ranked sixth and 14th respectively on Bielefeld’s 2011 list.

The top ten names of 2011 for boys and girls