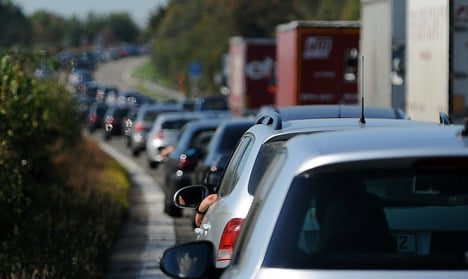 The worst affected areas this year have been urbanised North Rhine-Westphalia with 60,000 traffic jams, followed by Berlin with 30,000, Bavaria with 26,000 and Baden-Württemberg with 18,000, ADAC told Die Welt newspaper’s online edition.

Meyer said the government had concentrated on maintenance and improvement projects in the east, but had neglected problems in the western part of Germany.

He pointed to Cologne’s beltway as well as motorways connecting North Rhine-Westphalia’s Ruhr area with Frankfurt am Main and Hannover as particularly congested.

“Now we need to consider which motorways in the west need urgent upgrades,” Meyer told Die Welt, adding that German drivers had not seen the €36 million paid in fuel taxes each year being used on roads.

Other taxes on cars bring the grand annual total paid in the country to €53 million he said.

Germany’s traffic troubles are caused by crumbling bridges and damaged roads as well as never-ending construction projects that add to congestion, the ADAC said.

Meyer said the country’s bridges needed particular attention. About 300 bridges on motorways and main roads were in a state of disrepair, he said.

Transport Minister Peter Ramsauer told Die Welt that he was due to get an extra €1 billion next year for transport projects, and would focus on roads.