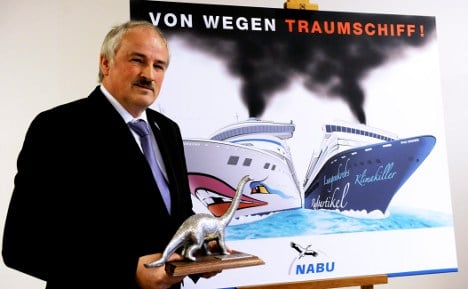 “They are the spearhead of the generally lucrative German cruise ship industry. They decorate their ships with great slogans such as wellness, airstream and sea air – but enormous levels of poisonous pollutants come from the chimneys of their luxury liners,” said Olaf Tschimpke, president of Nabu, the Nature and Biodiversity Conservation Union.

Nabu has named the two cruise firms Environmental Dinosaurs of the year for their environmental performance.

Tschimpke described the shining white fleets of cruise liners as actually sooty polluters which still use poisonous heavy oil. “A single ocean trip on a cruise emits the same amount of pollutants as five million cars on the same route,” he said in a statement.

Yet it need not be so damaging – Tschimpke said pollution could easily be reduced by using cleaner diesel and the addition of technology such as filters. But German cruise operators refuse to do this out of a hunger for profits, he said.

“Aida and Tui outdo each other with the most elaborate entertainment on board – nothing is too much for their restaurants, spas and casinos – but apparently there is not enough money for rust particle filters,” said Tschimpke.

Aida president Michael Thamm replied in a letter to Tschimpke where he said, “Aida Cruises takes qualified criticism very seriously and will take part in discussions.” He said that during 2010 his ships had reduced emissions of sulphur oxikes by 5.9 percent, carbon dioxide by 2.8 percent and nitrogen oxides and fine particles by 2.9 percent.

Tui said that work on a fine particle filter “solution” was being worked on urgently.