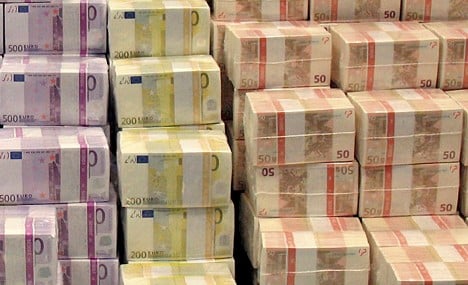 Chancellor Angela Merkel has made no bones about the advantages for Germany of the euro, which went into circulation as banknotes and coins on January 1, 2002, and whose future she has been grimly racing to shore up.

“As an exporting nation, Germany has particularly benefited from the euro,” she told lawmakers in her most recent speech to the lower house of parliament, the Bundestag.

“This is true not only for big companies but also for small and medium-sized companies,” she said.

But in its key market, the 17-nation eurozone, the euro means it no longer needs to hedge against losses from exchange rate fluctuations.

“With a single currency zone, all the uncertainties about exchange rates (within today’s eurozone) disappear,” Henrik Uterwedde, deputy director of the Franco German Institute in Ludwigsburg, pointed out.

For Germany’s car industry, which boasts heavy hitters such as Daimler, BMW and Volkswagen, this has certainly been good news.

Since the euro was introduced, German carmakers have saved between €300 million and €500 million ($400 million to $660 million) annually on transaction costs, according to Jürgen Pieper, analyst at German bank Metzler.

Ferdinand Fichtner, economist at the Berlin-based DIW economic institute, highlighted the importance of the eurozone as a marketplace for German goods.

“About 40 percent of its exports are destined for the eurozone and 20 percent for the rest of the European Union,” he said.

Some of the non-eurozone EU countries also have currencies pegged to the single currency such as the Danish krone or Latvia’s lat, he said.

Domestically much rides on Germany’s exports too.

Trade within today’s eurozone has been boosted by the euro, McKinsey management consultants said attributing two-thirds of German growth in the last 10 years to the euro’s introduction.

While the deutschmark was regarded as a safe haven currency, as is the case for the Swiss franc currently, the euro is less susceptible to strong appreciation on the currency market.

Nevertheless, the German economy does not entirely owe its success to the euro, a point underscored recently by Anton Börner, head of the German Exporters Federation.

Asking the rhetorical question: “Is there life for Germany after the euro?” he immediately answers: “Yes there is.”

The Ifo economic institute has struck a similar note while another institute, the DIW, notes that the euro is just one factor in Germany’s success story.

It points to the competitive advantages of Germany, which does not have an overall minimum wage, having sought to keep the lid on big salary increases.

For years, trade unions accepted only modest wage rises to save jobs, especially when faced with relocation.

By gradually pushing back the retirement age and reducing unemployment benefit and social welfare charges, Germany reduced its costs and overtook its neighbours who did not swallowed the same bitter pill.