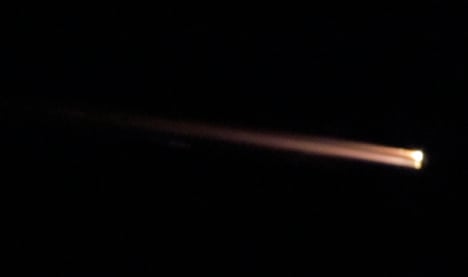 Callers to the Antenne Thüringen radio station described three glowing dots with a long tail which spread into several parts across the sky.

“It was great, very impressive,” said one caller. Another woman told the radio station, “We saw the light spectacle on the way home from church. Our daughter thought it looked like Santa’s sleigh with reindeer.”

Some said it looked like a red glowing star with a smoking tail, while others spoke of an intense white glowing tail.

Andreas Schütz, spokesman for the German Aerospace Centre (DLR) said the unidentified flying object was unlikely to have been Santa, or aliens or an accident – but was most likely to have been a meteorite, or even a piece of space junk falling to earth.

“It must have been a very large piece to create such intensity and duration of light,” he said.

The phenomenon was seen at around 5.30 p.m.across Germany, from the Netherlands border to the south of the country.