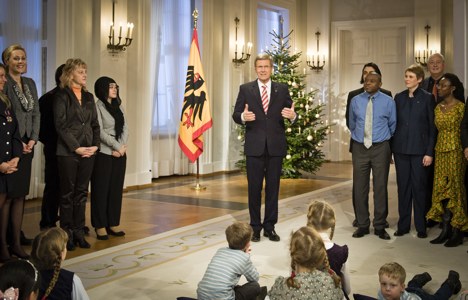 “Everyone in our country must be able to live safely. That’s true for everyone,” said Wulff.

Referring to a series of murders carried out by an underground cell of neo-Nazis, uncovered earlier this year, Wulff said, “So it shocks us all the more that criminals blinded with racism planned murders on people of foreign background over years.”

The president called on people to stay alert, and to be ready to “stand up for democracy and the life and freedom of all people” in Germany.

Wulff said his meetings with relatives of the victims of the murders had been deeply moving. “Many told me that they did not only lose a loved one, but that they were suddenly suspected themselves. Even friends and relatives withdrew from them,” he said.

“There is no place for xenophobia, violence or political extremism in our country,” he said, before calling on Germans to build an open society together. “That starts in everyday life – it’s up to me what kind of spiritual climate pervades my family, my religious community, my district or my club. Being open to foreign people and foreign things starts small.”

Wulff also spoke about Europe in his speech, which was recorded Wednesday in the company of around 70 German citizens, including firefighters, care-workers, religious ministers and immigrants.

He said that Europe stood for “the great values of freedom, human rights and social safety.”

“We can only achieve all these things together,” he said. “Saying anything else might garner short-term plaudits, but it is wrong. We Germans will stand in solidarity with Europe.”