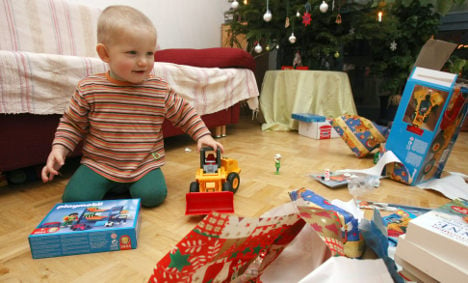 The countdown to Christmas is on and if there is one thing I love about living in Germany, it’s celebrating the holidays here. The pine boughs hanging everywhere, the Zimtsterne, Lebkuchen, and we best not forget the Glühwein.

As a family in Canada, we always celebrated Christmas the German way. I’m pretty sure my siblings and I were envied by our schoolmates. It all started on the first of December with the Advent calendars and their 24 doors of chocolate counting down to the big day.

When we spent the holidays in Cologne at my Oma and Opa’s house, we had a perennial Advent calendar. One that was reused every year filled with gems — sometimes new and sometimes the same from last year. It didn’t matter. We were always excited when it was our morning to open the next door to see what was behind it.

Advent calendars have become just as ubiquitous in North America and the UK as they are here, but the scale and options of Advent calendars found in Germany has yet to be matched. In Canada, we usually had waxy chocolate shaped into Christmas shapes for kids. Those can definitely be found in Germany, but the Teutonic chocolate-makers know that even parents like to countdown to the holidays, so you can get calendars filled with all sorts of chocolate specialities, pralines filled with nuts or booze.

But for the kids in Germany, it’s not just cheapo chocolate. Beloved brands Kinder and Milka make their own calendars. And if that’s just not good enough for your little one, you can pick up one with 24 days of toys. These Advent calendars get branded by Playmobil, LEGO, Barbie, even Japanese franchises like Pokemon are getting in on the action. And some will run you upwards of €50.

What really got most people talking on the playground in Canada, was when we revealed that us Germans open our gifts on December 24. Instead of putting out a plate of cookies and a glass of milk, listening for reindeer hooves on the roof, we waited for the Christkind or Christ Child to bring the gifts for the Bescherung.

So what do German kids find under the Christmas tree? According to a recent article in The Economist, Germany is Europe’s third-largest toy market, preceded by Britain and France. British babes are most likely to find playthings that are licensed from entertainment franchises like Disney.

Germans, always true to stereotype, go for the engineering toys. The Fatherland is LEGO’s biggest market globally and building sets of all ilk account for nearly 14 per cent of all toy sales here. While LEGO is based in Denmark, the moulds to make the ubiquitous bricks are made in Germany.

There are plenty of other beloved brands that are German, and they are just as popular here as they are around the world.

Playmobil, based in Zirndorf, Bavaria, also counts Germans as its largest market, claiming seven percent of all toy sales last year. The plastic figures and their sets have been cluttering floors since 1975.

For those looking to give something a little cuddlier, look no further than Steiff stuffed animals. While the “Teddy Bear” may have been created in the US and named after then-President Theodore Roosevelt, Steiff created its own bear in Germany around the same time. Based in Baden-Württemberg, the company continues to make its menagerie or products out of materials like mohair, alpaca and felt. Most of the work is still done by hand, which is why you can find some that will cost upwards of €150.

For the little ones on the Christkind‘s list, no material is thought more suitable for the toddling set than wood. Any toy store you go is filled with wooden options and German brand Haba is hands-down the most popular. Their toys are made from trees that come from sustainable forestry practises. And it’s not just blocks and ball tracks and rattles, they also make plush toys, many from organic materials.

But Germans aren’t immune to franchised playthings. In 2010, the best-selling toy in the country was the board game Schlag den Raab, based on the television competition of the same name in which TV personality Stefan Raab takes on a audience-picked competitor in a game of trivia and sports to win an impressive amount of money. The board game was released by another German company called Ravensburger, whose toys and books can be found in more than 50 countries around the world. While head-quartered in Ravensburg, Baden-Württemberg, much of the production is also kept at factories nearby.

With just a few more sleeps to go, I’ve still got my own list to finish checking off and Luisa assures me that she’s been a very good girl this year. My list, however, has just one thing on it: That Luisa starts regularly sleeping through the night.