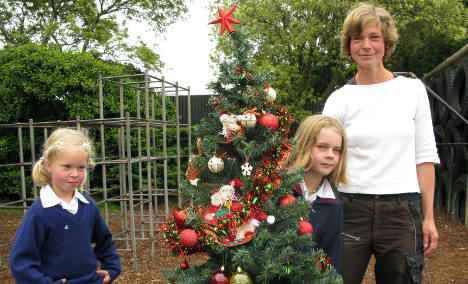 Tinsel sparkles and dangles from trees, fake snow decorates windows, Christmas carols ring out in shops – and the hot summer sun beats down, forcing sweating Santas into shorts and sunglasses.

“It’s hard to get used to,” laughs Katrin Haase, a cheery 37-year-old joiner from Düren, near Cologne, now living in Dunedin, a small university city on the east coast of New Zealand’s South Island.

“For me, Christmas is about winter markets, the spices in Glühwein and Lebkuchen, and cold, dark weather,” she says. “Here it’s totally different. It’s warm and really light at night. If you light some Christmas candles, you can’t really see them.”

Having moved with her husband, Jörg, also a carpenter, and their two young daughters, to the South Pacific in the search for work three years ago, she says she loves living in New Zealand because of the work opportunities here. She and her husband specialise in timber doors and window frames and Dunedin is full of old wooden houses, plus the openness of the city to people from other countries. What has been harder to wrap her head around is some of the Christmas traditions on this side of the world.

“When I see these cotton-wool snowflakes, it’s pretty normal for me, but I think it must be strange for New Zealanders having fake snow in the middle of summer,” she says from her home in the quiet, residential suburb of Mornington.

Her family are also yet to embrace the typical kiwi Christmas day lunch of a roast turkey or a leg of ham with salad and new potatoes, followed by the super sweet meringue desert, pavlova, and thick slices of Christmas cake.

Not that they tuck into big plates of Teutonic holiday fare like goose, red cabbage and dumplings, instead. “Last year was really hot, so we just had a buffet with salad and nice cheeses and things like that,” Haase says.

The year before they had a barbeque. Despite the change in yuletide food, they still get to feast on traditional German seasonal dishes. “Well, we do eat heavy food like that,” Haase explains, “but in winter when it’s cold.”

There are a few home Christmas treats that they can’t do without, however. Printen – thin, crunchy biscuits made with cinnamon and ginger, and Dominosteine – little layered cubes of cake, apricot jelly and marzipan covered in chocolate – are sent over every year from Germany by their family.

And as they normally would in Germany, the Haase household celebrate on Christmas Eve but, “because everyone else here does,” the family has started celebrating on the 25th as well. Presents are opened on the 24th, something, she says puts her daughters Frauke, 6, and Mara, 7, at an advantage over their friends. “The girls find it amusing when the other kids say: ‘One more sleep before Santa comes’, and they say: ‘Not for us!’”

Haase also reckons that Christmases in New Zealand are more fun for kids in general. “In Germany it’s solemn and serious. Here in New Zealand it’s more about songs like Rudolph the Red-nosed Reindeer, and Santa takes children on his knee. As kids in Germany we were really afraid of him and if you were bad, he wouldn’t bring you any presents.”

Children are warned the same thing in New Zealand, but Frauke and Mara, who go to a local Catholic primary school, don’t seem too worried that they’re going to miss out on a visit from the big jolly guy. The youngest isn’t sure what she wants, but Mara’s keen on a new umbrella after her last one broke. Given the overcast day that sits over the city after a week of lovely sunny weather, it’s probably not a bad present at all.

And what about their parents, is there anything they want for Christmas?

“Well, we miss family a lot at this time of the year,” Haase says. “But my mum’s just got over from Germany and is here for three months, which is really nice.”