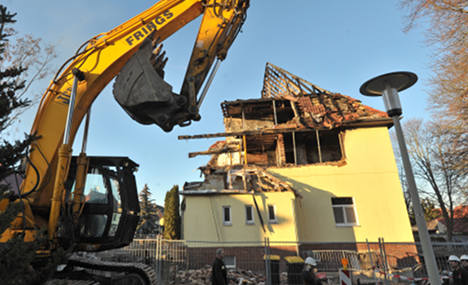 The house in Zwickau, Saxony, was home to Beate Zschäpe, Uwe Mundlos and Uwe Böhnhardt for several years. They called themselves the National Socialist Underground and are alleged to have killed nine shopkeepers and a policewoman between 2000 and 2007.

Zschäpe is said to have blown up the flat in November after her friends were caught having robbed a bank and one shot the other dead before killing himself. It was among the rubble that police found evidence linking the trio to the killings of the shop keepers and the policewoman, as well as a DVD of a video boasting of the killings.

Fears that the house could become a shrine for neo-Nazis, further damaging the reputation of the town has led to Zwickau authorities deciding to tear it down.

The owner has abandoned plans to renovate it, and has agreed to destroy it next year, said city spokesman Mathias Merz, although he would not say how much had been paid to the owner.

“I see a danger that the right-wing extremists will make this a cult meeting place along the lines of: ‘Our martyrs lived here.’ And I don’t want that,” said Mayor Pia Findeiß.

Zschäpe handed herself in to police shortly after the dramatic events of early November, while several men have since been arrested, suspected of having helped the trio.