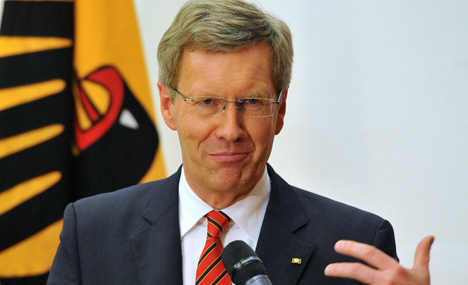 Wulff, in a statement released last week, expressed “regret” for neglecting to mention the loan he’d received from the wife of German businessman Egon Geerkens. Mrs. Geerkens reportedly lent Wulff and his wife €500,000 so the couple could buy a house. Wulff has since replaced the private loan with a traditional loan from a bank.

Thomas Oppermann, the parliamentary head of the opposition centre-left Social Democratic Party (SPD) in the lower house Bundestag, told the Bild am Sonntag newspaper that it seemed as if the businessman Geerkens “concocted a small, phony business deal” and that the whole affair had damaged the office of the presidency.

“He now has to act really quickly and pro-actively put everything on the table,” Nahles told the German television program the Tagesschau on Saturday.

“If he can’t do that then he should think about whether he can continue to set an example for Germany.”

The news magazine Der Spiegel said it is not clear whether Geerkens’ wife actually made the loan or whether it was Geerkens himself. The businessman told the magazine that he, not his wife, directed the negotiations over the loan and that the friendly connection between the two families was based on his relationship with the Christian Democrat Wulff.

The payment of the loan was conducted via Edith Geerken’s bank account, according to Wulff, but Egon Geerkens had power of attorney over the account, the magazine said. The repayment of the loan in 2010 was done through an account that belonged to both spouses.

Green party MP Hans-Christian Ströbele told the Focus news magazine that, “If it’s proven that Mr. Geerkens conducted the negotiations with Mr. Wulff and that he knew that, then the situation could completely change” and that would make it very difficult for the German president.

“The immediate resignation is an act of integrity and responsibility,” Lotter told the news agency DPA. He said instead of setting an example for Germans in a time of turbulence, Wulff is now preoccupied with how to explain his way out of his home loan.