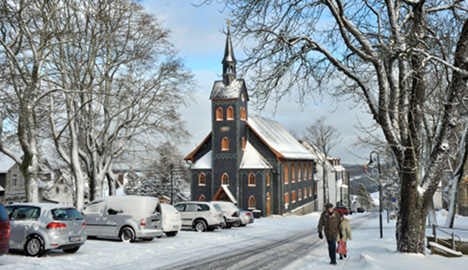 For those in eastern Germany the outlook isn’t very good. Folks in the northern and western parts of the country have a 20 to 30 percent chance of snow, the meteorologist Michael Klein said.

Cold temperatures are expected for the beginning of the coming week, then by mid-week it should be milder, but by the weekend the thermometer could dip down again, he said.

German cities and towns are already discussing how to cut back on energy usage during the festive season as the country grapples with fears over a gas shortage and rocketing energy costs.

Now Environmental Action Germany (Deutsche Umwelthilfe or DUH) – has said that businesses and households should massively cut down on lighting further in view of the energy crisis – and to protect the environment.

“This winter, it should be a matter of course to do without Christmas lights in cities as well as those in houses and apartments,” DUH managing director Jürgen Resch told the Redaktionsnetzwerk Deutschland.

“In view of the war in Ukraine, the energy shortage, but also for reasons of climate protection, we should pause for a moment,” said Resch.

Environmentalists see the crisis as an opportunity for looking at sustainability and species conservation.

He pointed to the scale of electricity used for light displays during the Christmas season. “Private lighting alone causes electricity consumption of over 600 million kilowatt hours per year – as much as a medium-sized city with 400,000 inhabitants consumes in a year,” Resch said.

“Add to that the potential savings from not having Christmas lights in our cities and towns.”

Resch suggested a different approach this year. “Perhaps this can be reduced to one illuminated tree per community,” he said.

“Consciously doing without (lights) here – saving and showing solidarity – that could make this Christmas season a very special one.”

The German government has called on people to cut down on energy consumption as Russia continues to squeeze the supply.

As The Local has been reporting, districts across the country are considering how to save energy during the darker months.

Many regions are cutting down on lighting displays or getting rid of ice rinks.

According to a survey by the trade association, lots of retailers are planning to ditch lights this year because of the sharp rise in electricity costs.