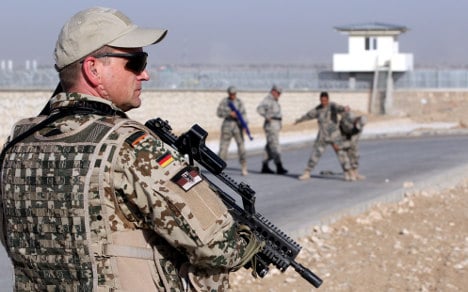 Under the government’s plans, beginning in February there would be a cap of 4,900 on the number of German troops allowed to be stationed in Afghanistan, a decrease from the current authorised strength of 5,350.

“Nothing is easy in Afghanistan,” Westerwelle said in a speech to parliament. “There will be no military solution, but rather only a political one.”

Defence Minister Thomas de Maizière told the Bundestag that the government hopes to reduce the limit further to 4,400 during the course of the year, though that depends on security circumstances and US withdrawal plans, to be decided in April 2012. Around 5,000 troops are currently stationed in Afghanistan.

The Bundestag is expected to vote on the mission extension in January, though a victory for the government is all but assured since the main opposition party, the centre-left Social Democratic Party (SPD), has already signalled its support.

But the reduction in the troop cap – the first since Germany’s Afghanistan mission began in 2001 – was not enough to win the support of the rest of the opposition. The Left and the Green parties, who both oppose the war, said they would vote against it.

All three opposition parties, including the SPD, questioned Westerwelle’s description of the war as having reached a “turning point.”

SPD foreign policy spokesman Gernot Erler admitted that the security situation in Afghanistan was improving, and the first stage of the transfer of power to Afghan forces “seems to be successful.”

But he said one could only talk of a turning point once the Afghan government had taken more decisive action against corruption and the drug trade.