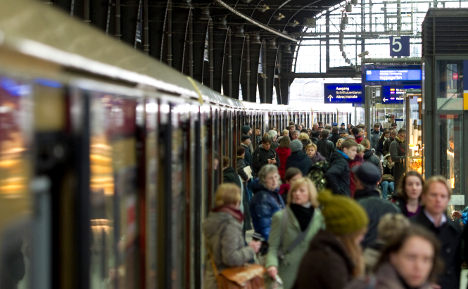 Initial information suggested that a central electronic control box had broken down, though it remained unclear what caused it, the Tagesspiegel newspaper reported.

The breakdown even meant the drivers could not be reached by radio.

Passengers are currently being advised to use the rest of the city’s public transport system – underground U-Bahn trains, buses and trams are consequently filling up fast.

According to S-Bahn operator Deutsche Bahn, a large proportion of the signals and points are operated by a single control centre near the Halensee station in the west of the city. This appears to have lost its power supply.

A brief statement on the S-Bahn website said, “A power cut at the electronic control centre in Halensee has caused a complete failure of the S-Bahn system.”

Irregular connections have already been re-established on some of the outer lines.

The S-Bahn’s press service was also apparently been caught completely off guard. According to the Tagesspiegel, the press communications team were out on a holiday “advent trip” Thursday. The newspaper was not told what means of transport they took.

Berlin Transport Minister Michael Müller told Der Tagesspiegel, “I hope that the S-Bahn solves its technical problem today, and as quickly as possible. It’s almost impossible to imagine that all the S-Bahn’s trains could break down because of a single control centre defect.”

The S-Bahn network – operated separately from the city’s underground trains – stretches from the city centre all the way into the state of Brandenburg. Several regional trains have also been affected by the breakdown.

The S-Bahn system currently transports around 1.3 million passengers daily. It has around 160 stations and 330 kilometres of track. It has been plagued with maintenance problems in recent years, frequently forcing Deutsche Bahn to scale back service.