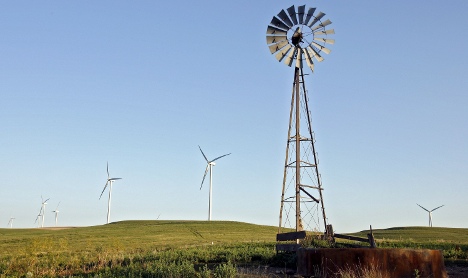 Seeing huge rotor blades slash the sky in Germany has become commonplace over the last 20 years, as wind turbines have multiplied across the countryside.

But as the country races to meet European Union renewable energy targets, companies are not only under pressure to meet the time constraints of the EU’s Energy Roadmap 2050 – which highlights wind energy as a prominent future power source – they are also running out of room to expand on German soil.

Meanwhile, the US is pursuing its own renewable energy goals – a US Department of Energy report published in 2008 suggests covering 20 percent of American power needs with wind energy by 2030. And German experience in the wind energy sector will be an important component for the United States, according to Michael Blank, vice-president of the German-American chamber of commerce.

“I think what’s good for Europe is also good for the US,” Blank said.

The United States is also good for German industry in terms of potential wind power far outstripping that of Europe.

For years, the US was the biggest provider and installer of wind energy, although China has recently pulled ahead. In 2010, the United States claimed 20.7 percent of wind energy installed capacity and market share, just under China’s 21.8 percent, according to the Global Wind Energy Council. Germany ranked third at 14 percent.

“The US is attractive because one has the feeling, as a German, that the entire country, the entire United States, is one single market,” she said.

Wörlen emphasized, however, that German energy leaders may view the US market size through rose-tinted glasses since large policy differences can exist state-to-state, especially in renewable energy.

“The tricky part in the US is that it’s separated into two pieces: the federal side and state side. On the state side, the goal is really to build up renewable energy, on the federal side, there’s not a lot the government can do. It’s very challenging to deal with these local interest groups and get a unified voice. In Germany there are a lot more unified national initiatives,” said Matthew Allen, consulting services manager at the German American Chamber of Commerce.

German energy leaders, such as Siemens and BayWa AG, a Munich-based agricultural products and building-materials maker, still see the United States as very important in terms of wind energy and are expanding their companies in the US, hoping for an American renewable energy boom.

“The US is one of the most important wind power markets in the world, ranking number two in both new installations and cumulative installations at the end of 2010,” Mark Albenze, CEO of Siemens Energy’s Wind Power Americas business unit, told The Local in an email.

“In wind energy, Siemens was number two in terms of installed capacity in the US in 2010. In the last five years, the US market has represented more than 40 percent of Siemens’ global installations,” Albenze said.

Kenersys, a wind turbine manufacturing company based in Münster, in May premièred its K100 turbine at Lincoln Electric world headquarters in Ohio.

“The USA are one of the most important and most promising wind energy markets in the world,” Paulo Fernando Soares, Kenersys Group CEO, said in a statement. “When Kenersys started in 2007 in Europe and Asia-Pacific, the US (had) already been an instrumental part of our growth strategy.”

In comparison to terrestrial wind parks, offshore wind energy is still developing. But bi-yearly conferences, such as the German American Offshore Conference, held October 18 in New Jersey, attract German companies to the United States for networking and showcasing their wares.

Germany’s own handful of offshore wind farms, including Alpha Ventus, opened April 2010 in the North Sea, and Baltic 1, which opened in May 2011 in the Baltic Sea, have set the stage for future expansion.

But in Germany, “the offshore sector is not completely open yet,” Dietmar Schültz, president of the German Renewable Energy Federation (BEE) said in Berlin at the 2011 annual renewable energy conference.

“In the US, we’re getting closer to building a market, and the German companies also recognize that,” Allen said.

Siemens, attempting to insure its industry-leading position in offshore wind power development, has already secured contracts with Cape Wind, the premier US-offshore wind project off the coast of Nantucket in Massachusetts, to provide turbine equipment and with Deepwater Wind, a planned project near Block Island, Rhode Island.

“The offshore market is also beginning to materialize in the US. Greater research and interest is developing in the northeast region,” Albenze said. “We believe wind is here to stay and are confident in the long-term outlook of the renewable energy market in the US.”