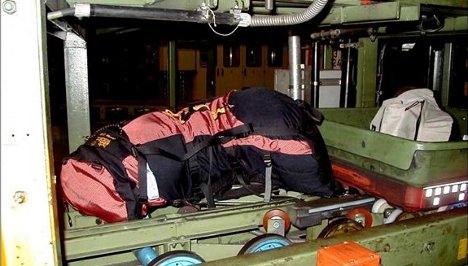 The Frankfurt Airport baggage handling office looks like the deck of the Starship Enterprise – it’s futuristic in a kind of 1960s way. A long desk with lines of computers faces a large board with small yellow lights. The lights represent the maze of bags winding through the system. When there are problems, a light will turn red. Elkhanova says one type of bag in particular causes lots of red lights.

“We are terrorized by backpacks,” says Elkhanova.

Tip #1: Straps are not your friend

More than 100,000 pieces of luggage pass through Frankfurt Airport in a day. But the one most likely to cause problems? The benign-looking backpack.

Elkhanova says bags with straps catch on everything as they travel down the baggage belt. Straps snag on sprinkler systems drenching everything on the line. Straps stick in gears grinding the belt to a halt.

The best way to deal with your backpack?

Elkhanova says, “Don’t put it in a big plastic bag and tie it up like a Christmas present. Just make sure all straps are secured.” She says straps should be circled around the backpack body and snapped tightly, not connected and hanging loose.

I know. You spent a lot on presents this year, but don’t try to save money by checking your pet in a regular bag.

Elkhanova says one budget-conscious traveller tried to save a few bucks by sedating his puppy, putting it in a box and checking it like normal luggage. The puppy was discovered before it went on the plane. Good thing. The area where bags are stowed is frigid cold and low in oxygen. The dog wouldn’t have made it to touchdown.

The best way to prevent your bag from being opened and searched (we all love that right?) is to separate organic goods from non-organic goods, says Elkhanova.

All explosives are organics. So when an organic material is connected with electronics – it looks suspicious. For example, the x-ray image of your cell phone charger’s cord wrapped around a pound of chocolate doesn’t look like efficient packing; it looks more like the makings for a bomb.

Elkahanova recommends always separating food, clothes and books on one side of your suitcase and packing all electronics on the other side.

“You can be sure it will be thrown – always, always,” says Elkhanova. “There is no other way.”

Dainty and haute couture designs don’t do much when it comes to keeping your luggage intact. Elkhanova says luggage goes through a lot on its way to the aeroplane. Baggage handlers lift and throw the bags as a way to prevent back injuries. So think sturdy when picking a bag.

She also says flashy bags might attract attention in some airports where security is a higher concern.

Tip #5 Luggage likes to be labelled

After your bag’s been thrown from one place to the next, the nametag may have disappeared. Elkahnova suggests also putting a piece of paper inside your bag on top of your clothes with a name, address and phone number. That way is the bag tag goes missing, an airport official can just open your bag and get the information needed to reunite you with your long-lost luggage.

She says bags are usually reunited with their owners because of an international organization in Montreal, Canada called Société Internationale de Télécommunication Aéronautique (SITA). When your bag goes missing on the way to Moscow, the description of the bag gets sent to SITA. Then, when an airport in Honolulu turns up a bag with no identification, it sends the information to SITA. When SITA makes a match, the bags get sent to your destination.

If you’re bringing lots of gear for your fancy scuba holiday in Aruba or spelunking in Malaga, don’t forget to take out the battery from your high-powered torch, or flashlight to Americans. If the torch switches on en route to your destination you may end up with charred clothes. Same goes for laptops and other electronics that cause heat when switched on.

Tip #7 Pick the hub with the best grub

Not all airports are created equal. Travel hubs like Heathrow and Amsterdam have the highest error rate for baggage delivery because so many people make tight connections there. But hubs also tend to have the best infrastructure to deal with all kinds of travel problems.

Frankfurt, for instance, distributes water and chocolate when planes are delayed or snowed in. Sometimes they’ll even provide beds. Elkhanova says many of Frankfurt’s down-and-out residents head to the airport on bad weather days because they know there’s free grub.

Tip #8 The airlines can handle almost anything. Just call ahead.

Sure, but what about a travelling circus?

She says the Frankfurt Airport regularly deals with circus artists travelling in and out of Germany. They need special handling for their very long ropes and poles used for tightrope walking.

So your surfboard or skis? No big deal. Just call ahead.