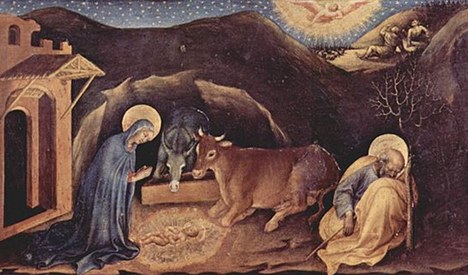 The German “Joseph of Nazareth” began his entertaining take on the birth of Jesus at the beginning of this month and he plans to continue Tweeting right up to Christmas. Following a blitz of publicity, his account has gained nearly 10,000 followers.

“I never expected all of this, I’ve been amazed at people’s interest in Joseph,” he told The Local in a telephone interview on Monday.

Joseph was, of course, the humble carpenter and husband of Jesus’ mother, the Virgin Mary who appears in the Bible’s New Testament. In the scripture, the pair travel to Bethlehem, where Jesus is born in a stable.

Joseph on Twitter has been working up to that point, while posting messages in both English and German.

“Do you have any carpenter’s work in Jerusalem? If so, I’m the man for the job,” he posted recently with a qualifier: “I can only take orders in Nazareth and the surrounding area.”

Lately he’s been mulling over his coming journey, asking his Twitter followers for suggestions on the most effective way to travel with a pregnant woman.

“I’m curious if my good old Vespa holds on the whole way to Bethlehem,” he wrote on Sunday.

The owner of the account admits that Joseph doesn’t really exist, but he told The Local, the point is to present Christmas in a entertaining way that captures the imagination of the Twitter universe.

The man said that he considers himself a Christian but isn’t trying to proselytise. If, however, a few people decide to go to church as a result of his Tweets, that would be nice, he said.

“The idea is to bring people closer to Christmas, but from a new perspective,” he told The Local. “I thought people would be interested in looking at Joseph in a new way.”

What happens to the account after Christmas? The man said it will go dormant so future generations of Twitter-lovers will be able to see Joseph’s story from beginning to end.

But for now, Joseph still has a lot of work to do. He’s getting ready to travel to Bethlehem. And he has lots to discuss with his fans from around the world who have been sending him questions over Twitter on everything from his future plans to why someone from Nazareth is tweeting in German.

“Why do people like this? It’s fun and people enjoy that,” he said.