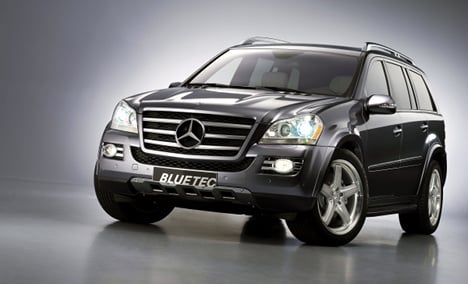 According to a report in Der Spiegel magazine’s online edition, the 2009 Mercedes GL 420, which retails for about €75,000, was originally driven by two businessmen in Baden-Württemberg who reported it stolen last year.

Suspicious police investigators later determined that the men were involved in smuggling cars to eastern Europe – including the Mercedes. They were sentenced to five and nine years in prison.

But despite the fact that the men didn’t actually own the SUV – it was technically the property of Mercedes, which had been leasing it to them – Ukrainian authorities seized the vehicle at the border and decided to keep it, Spiegel reported.

A court determined that the authorities didn’t have to send the SUV back to Germany, despite an Interpol alert, and it was eventually transferred to Justice Minister Oleksandr Lavrynovych, who has been using it ever since. Ukrainian law allows authorities to permanently seize cars stolen elsewhere if they come into the possession of authorities, Spiegel reported.

But some officials in Ukraine have said that the whole affair is shady and the car should be returned to Germany.

“This only underlines the fact that there exists a specific scheme for stealing automobiles and smuggling them into Ukraine, after which the ownership is transferred to the Ukrainian government through court decisions and later sold,” Ukrainian parliamentary deputy Valerii Konovaliuk told the Ukrainian News Agency

It’s not clear whether Lavrynovych will continue to drive the SUV.

The announcement came after German Defence Minister Christine Lambrecht visited Ukraine this weekend for the first time since Moscow’s invasion in February.

Germany, Denmark and Norway had agreed to jointly finance the procurement of the Slovakian Zuzana-2 guns at a cost of 92 million euros ($90.2 million), said the defence ministry in Berlin.

They will be produced in Slovakia, with delivery to Ukraine to begin in 2023, it said.

The new pledge still falls short of what Ukraine has been asking for. Kyiv has repeatedly sought Leopard battle tanks from Germany, but Chancellor Olaf Scholz’s government has refused.

Scholz has said he does not want to go it alone on arms supplies and will only take decisions in consultation with his Western allies.

“We will continue to engage in a variety of ways and will again — as we have up until now — work together with partners,” she told the “Bericht aus Berlin” show.

She also insisted that Germany would not become a direct party to the conflict.

“It is very clear — for the German government as well as the whole of NATO: We will not become a party to the war,” Lambrecht said.

Her visit Saturday to the southern port city of Odessa came a day after Russian President Vladimir Putin declared the annexation of four Ukrainian regions.

The annexations were unanimously condemned by Ukraine’s allies, including Germany.

Lambrecht described how air raid sirens went off during her visit.

“We experienced that twice in a few hours, and had to move to a bunker. And for people there, that is reality,” she told the ARD show. “That is everyday life.”