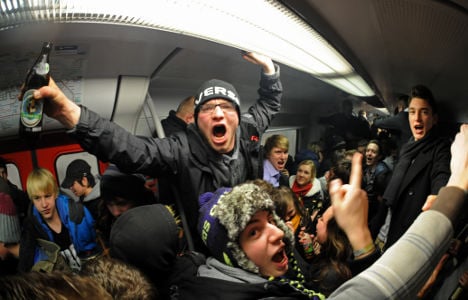 The head of the Munich S-Bahn commuter train network Bernhard Weisser said that the situation had escalated in many trains by 10 pm, and that while there was extensive damage to the lights, partitions and other fittings inside the trains, no-one was hurt. An emergency brake was pulled once.

Repairing the damage was estimated to cost a low six-figure sum.

The “farewell drink” was organized via Facebook to celebrate the last day that alcohol consumption would be allowed on Munich’s S-Bahn.

Organizers of the event issued a polite request to attendees on the Facebook event page to “please be responsible in your drinking and be respectful to your fellow party-goers,” adding that “a senseless binging session is not what we’re aiming for.”

An alcohol ban has already been in force on the city’s underground trains, trams and buses since 2009.