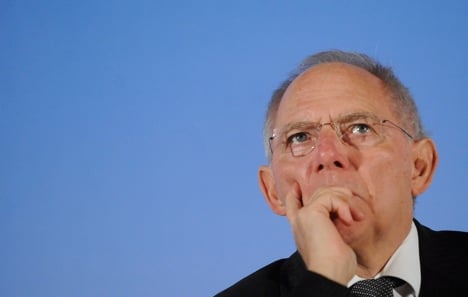 A central figure in German politics since the 1980s, the 69-year-old veteran conservative has been a major player in ongoing efforts to resolve the eurozone debt crisis.

The prize, to be presented on May 17, honours Schäuble’s “major contributions to the stabilization of the monetary union and the deepening of the integration process,” said the statement.

Europe is “a matter of the heart and of intimate conviction” for the former Christian Democratic Union (CDU) leader, said the mayor of the German city of Aachen, Marcel Philipp, and award committee head Jürgen Linden.

The jury also paid tribute to Schäuble’s “great efforts in overcoming the division of Germany and of Europe” and his role as a “significant player in virtually all the advances of integration in recent decades,” it said.

The only member of the German cabinet born during World War II, Schäuble has served as Chancellor Angela Merkel’s finance minister since 2009.

He served as interior minister under Merkel’s first government, from 2005 to 2009, and previously under former chancellor Helmut Kohl. Since a 1990 assassination attempt, he uses a wheelchair.