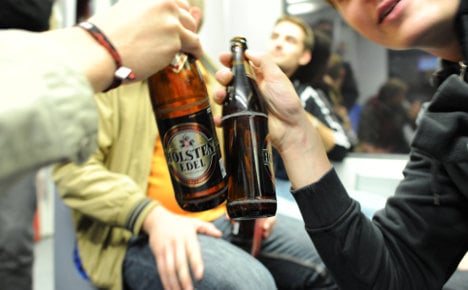 From December 11 the consumption of alcohol will be made illegal on all public transport in Munich. An alcohol ban has already been in force on the city’s underground trains, trams and buses since 2009.

Der Spiegel reported Friday that the event, dubbed MVV-Abschiedsfeier (Munich transport system leaving party), has nearly 2,000 confirmed guests on Facebook who will meet at 8 pm in the Stachus-Brunnen area of the city centre; from there the group will ride the S-Bahn between Hackerbrücke and Ostbahnhof stations.

Organizers of the event have issued a polite request to attendees on the Facebook event page to “please be responsible in your drinking and be respectful to your fellow party-goers,” adding that “a senseless binging session is not what we’re aiming for.”

A spokesman for the Munich S-Bahns said that they were not too concerned about the event as “over 800,000 people get on and off the trains every day.”

“The spectacle is beginning before midnight and so will end before the beginning of the ban” he said. “The event shouldn’t escalate to a conflict situation, but it is important that other people on the trains aren’t adversely affected by the party,” he added.

A spokesperson from the Munich police said that “they had bigger things to deal with on a Saturday night, and would only intervene if the consumption of alcohol sparked violence.”

A similar event took place in Hamburg on October 1, when 1,000 revellers turned up for a last alcoholic hurrah on their underground system before a similar ban came into effect. The evening went smoothly, bar some isolated reports of fighting.