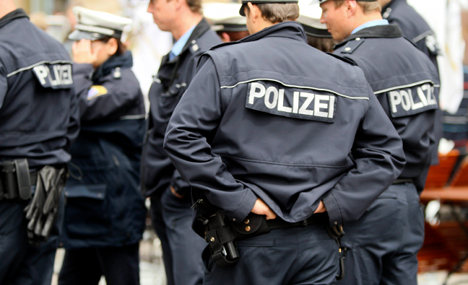 The authorities said they could not rule out an ongoing threat, saying they were continuing their investigation after an explosive device addressed to Deutsche Bank boss Josef Ackermann was discovered on Thursday.

“In the intensive search for evidence, authorities from the Hessian State Office of Criminal Investigation found a hidden, rolled up letter written in Italian,” police said in a statement.

“In it, the ‘FAI – Federazione Anarchica Informale’ (Informal Anarchist Federation) claimed responsibility for the attempted letter bomb attack against Dr. Ackermann. The authors spoke of ‘three explosions against banks, bankers, ticks and bloodsuckers’.”

They said the FAI was behind several attacks against European institutions, including an attempted letter bombing against the European Central Bank in Frankfurt in 2003.

“At that time, the FAI also wrote to claim responsibility,” authorities said, although German police were never able to identify individual suspects. “Their findings from that time are being used in the current probe,” police said.

The brown envelope addressed to the Swiss-born Ackermann arrived at Deutsche Bank’s mailroom and was x-rayed after it raised suspicion among staff. Police said Thursday it contained a live bomb.

A police spokesman said FAI’s claim of responsibility had been found in the envelope.

Media reports said Ackermann was not in the building at the time.

In April, the FAI said it was behind a letter bomb which injured two people when it exploded at the offices of the Swiss nuclear energy association.

On the same day, an Italian military officer was wounded in an army barracks by a letter bomb apparently sent by the same group.

The FAI has also claimed responsibility for a letter bomb sent to a Greek top security prison where a number of far-left extremists are incarcerated.

And it was behind a parcel bombing campaign in Rome one year ago that injured two people at the embassies of Switzerland and Chile and also targeted the Greek embassy.

Occupy Frankfurt, a protest movement inspired by the anti-Wall Street protests against corporate greed in the United States, had earlier insisted it had “nothing to do” with the letter bomb and condemned the attempted attack.

“We do not fight against individuals but rather against the system,” its spokesman, Frank Stegmaier, told news agency AFP.

A spokesman said Deutsche Bank had stepped up security as a result of the incident but declined to give further details.

The case came amid mounting anger in Europe over the role of banks in the eurozone debt crisis and the turmoil’s impact on the economy at large.

The chairman of the German Police Union, Rainer Wendt, said the attempted attack must be taken “very seriously.”

“This case shows with shocking clarity how important political decisions to end the financial crisis are so that social calm can return,” he told the online service of business daily Handelsblatt.

The incident revived memories of the assassination of Deutsche Bank chief Alfred Herrhausen on November 30, 1989 in a sophisticated roadside bombing mounted by the left-wing urban guerrilla group Red Army Faction.

The 63-year-old Ackermann has been a divisive figure since he took the helm of the bank in 2002. He plans to step down in May 2012 after the group’s annual shareholder meeting and will be replaced by the German-Indian duo of Jürgen Fitschen and Anshu Jain.

The position of Deutsche Bank boss is an extremely high-profile job that requires its holder to mix with politicians and business leaders.

Chancellor Angela Merkel came in for sharp criticism at the height of the financial crisis in 2008 for appearing too chummy with Ackermann, even throwing a birthday dinner for him at her offices.

His €9.5-million ($12.7 million) salary had also raised eyebrows amid a government bailout of the banking sector.