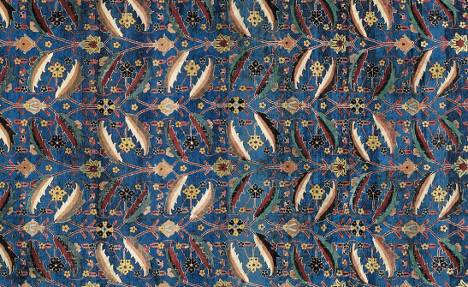 The Persian “vase” carpet became the most valuable in the world after British auctioneers Christie’s sold it for €7.2 million last year.

The Hamburg dealer who bought it in the German auction and realised it was something special made his fortune.

This left the woman furious that she had missed out on so much money and she sued the auction house in Augsburg which had first sold the carpet, claiming €350,000 in compensation.

She told the Augsburg court on Wednesday she had felt overwhelmed when Georg Rehm came to the flat she was moving out of, and removed a number of items to sell for her. Yet she spoke of friendly conversation and cups of coffee, Die Welt newspaper reported.

The first records of the carpet say it was bought by the Countess Martine Marie-Pol of Béhague, an important French art patron. She left it to her nephew the Marquis of Garney and it stayed in the family for decades until 1987 when the German dealer bought it in an auction. He obviously did not realise what he had, and gave it to his housekeeper.

This housekeeper had left it in her will to her friend – who had kept it in storage for years.

“It was so big, so long, it didn’t fit into my flat,” she said of the carpet which is more than three metres long and one-and-a-half wide.

She decided to move house after her husband died, and wanted to sell off some stuff via the auctioneer. He said as a general dealer he was no expert in carpets and put it in his catalogue without a picture, with an estimate price of €900.

“Had I known what it was, I would have rejected it,” he told the court. His lawyer said he generally dealt with house-hold items and had never heard of the “Survey of Persian Art” by Arthur Upham Pope, a standard reference book for collectors in which the carpet was pictured.

A suggestion from the judge as the court case started, that the auctioneer pay the woman €80,000, was rejected by his lawyers, saying it would leave him bankrupt. His offer of half that was not enough to satisfy the woman, so the case will now be heard in full, with a verdict due towards the end of January.