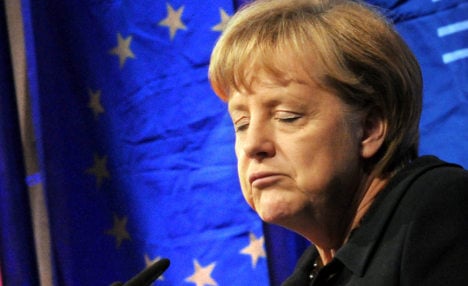 A spokesman for Chancellor Angela Merkel said he expected “very challenging and occasionally very difficult talks” at the two-day meeting in Brussels that aims to come up with a definite solution to the euro’s crippling debt crisis.

Earlier, a government source who insisted on anonymity told reporters he was “more pessimistic than I was last week on the chances of a total agreement.”

He said that preparatory talks had given him the impression that “several partners have not yet understood the seriousness of the situation.”

The German source’s comments depressed the euro on the foreign exchange markets and pushed down stocks that had previously opened in buoyant mood on renewed hopes the summit could provide the final deal.

He said that those blocking progress to what France and Germany see as the right solution to the crisis were “institutions as well as member states,” setting up a possible conflict between Berlin and the European Commission.

Paris and Berlin are convinced the only way out of the crisis is by changing the EU treaties to plug gaping holes in the construction of the euro, introduced with great euphoria less than a decade ago.

Merkel’s spokesman, Steffen Seibert, said Germany was travelling to Brussels with the desire for a “new legal framework” for the EU as a response to the eurozone debt crisis that has threatened to tip the bloc into recession.

The Franco-German power couple at the heart of Europe wants treaty change as a way of strengthening budgetary discipline and automatically punishing countries that do not play by the rules.

However, the head of the European Union, Herman Van Rompuy, has said in a leaked report that tighter budgetary rules could be agreed quickly and simply, without recourse to treaty change.

Van Rompuy wants leaders to agree to amend a protocol attached to the EU’s Lisbon Treaty, a proposal the German source indirectly attacked as a “typical Brussels bag of tricks.”

And Germany, Europe’s top economy and political powerhouse, does not seem to be in a mood to negotiate.

“There will be no useless compromises made with this government,” another senior source said.

Berlin appeared to strike down several propositions made to solve the crisis, including turning the EU’s future bailout fund, the ESM, into a bank and pooling debt in the eurozone in the controversial form of eurobonds.

Eurobonds, said the source, would “increase the problems, not ease them,” adding: “I don’t think that anyone can seriously say that eurobonds are the right answer to this crisis.”

The source also dismissed reports that the ESM could run in parallel with the existing bailout fund, the European Financial Stability Fund (EFSF), stressing: “The ESM must follow the EFSF.”

The “indispensable” result of the summit must be “at least” a deal between the 17 countries that share the euro, imposing on them “legally binding” rules to stop such a crisis happening again, Berlin believes.

However, amid fears of a so-called “two-speed Europe” emerging, the source was at pains to add that any country outside the euro was “cordially invited” to sign up to such a deal.

There was likely to be a meeting of the 17 eurozone leaders on the sidelines of the EU meeting, the source said, but it was not yet clear exactly when this would be.

“There is no question of making a closed eurozone,” the German source said, as British Prime Minister David Cameron for one faces an ever-louder clamour for his country to leave the embattled European Union altogether.

Whether or not Europe does manage to thrash out a solution to a crisis that many, including Merkel, have described as the worst since World War II, it is unlikely to happen quickly.

The summit begins on Thursday with a working dinner and continues into Friday.

However, “we don’t have anything planned for the weekend,” the German source said, rolling his eyes.