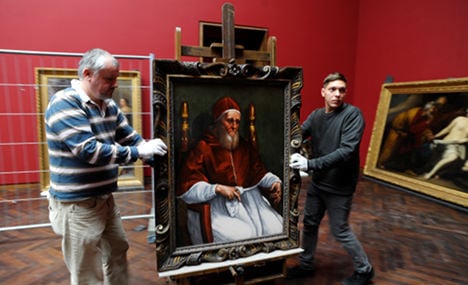 The portrait of the man known as the “fearsome pope” is said to have been painted between 1511 and 1512. Two other versions have been authenticated as Raphael’s work – one which hangs today in the Uffizi Gallery in Florence and another in the National Gallery in London.

This third version was long thought to have been the work of an imitator and was auctioned to a private collector in 2007. The Städel museum bought it for less than market value in 2010 and authenticated it as Raphael’s following extensive research and a thorough restoration.

Other paintings and drawings by Raphael have sold for tens of millions of euros. The Frankfurt Raphael will be displayed to the public from December 15.

“We consider ourselves extremely fortunate to have secured such a high-calibre work of the High Renaissance for our collection of old master artists,” said Städel director Max Hollein.

“All test results prove the origin of the work in an Italian artist’s workshop of the early 16th century beyond a doubt,” said Jochen Sander, who heads the museum’s collection of so-called “old master” paintings – those produced by European painters before the early 1800s.

As in many works by master artists, assistants probably played a part in creating the painting. But the most technically demanding and important sections were probably painted by Raphael himself, Sander said.

The museum said the 106 centimetre high and 78 centimetre wide painting was not an exact replica of Raphael’s other works of the pope, most likely commissioned for propaganda purposes to hang in churches or in the homes of nobility. There are slight differences in the pope’s face and position of his chair, among other things, which the museum says point to a “very creative” painting process.

Raphael, who died in 1520 aged 39, is considered to be one of the greatest artists of his time and is well-known for his fresco work at the Vatican, where he was much beloved by Julius II. He assembled a large team of skilled artisans to help him, many of whom also became famous.