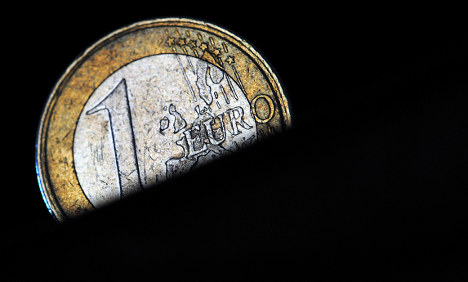 “On Thursday and Friday we will take the decisions which we consider important for the eurozone…,” she said in response to a question about the credit warning, referring to a crucial EU summit in Brussels.

This would contribute to stabilising the 17-member eurozone and provide confidence, Merkel said at joint press conference in Berlin with Afghan President Hamid Karzai.

“I have always said it’s a long process which will still last a long time. But this path is now mapped out, also yesterday through the meeting with the French president, and we will continue on this path,” she added.

It followed a joint announcement by Merkel and French President Nicolas Sarkozy in Paris that they wanted treaty changes to enforce budget discipline, in a bid to tackle the euro crisis.

But just hours later, Standard and Poor’s warned the eurozone members of possible credit downgrades as economic conditions worsen and the region’s leadership remains divided over what to do.

Raising the stakes three days before Europe’s leaders were to meet to forge a comprehensive fix to the economic crisis, S&P placed the 15 countries on a negative credit watch — a warning of a possible imminent cut in their sovereign credit ratings.

“Systemic stresses in the eurozone have risen in recent weeks to the extent that they now put downward pressure on the credit standing of the eurozone as a whole,” the ratings agency said in a statement.

It cited tightening credit across the single-currency zone, the rising costs for even the fiscally strongest governments to borrow, and deteriorating economic conditions that could push the whole region into recession next year.

But S&P also blamed “continuing disagreements among European policy makers on how to tackle the immediate market confidence crisis and, longer term, how to ensure greater economic, financial, and fiscal convergence among eurozone members.”

The warning threatened a one-notch cut to the hallowed AAA ratings of Germany, the Netherlands, Finland, Luxembourg and Austria.

France, also AAA-rated and the eurozone’s second-largest economy, could be hit with a two-notch cut, as could the other countries currently rated below AAA. Cyprus and Greece, their ratings already cut to just above or at junk bond level, were not affected by the warning.

S&P said it would complete a review of the 15 countries’ ratings “as soon as possible” following the EU summit in Brussels Thursday and Friday.

“Markets have no trust in the eurozone right now,” Schäuble said in Vienna, adding that S&P’s move was the “best incentive possible for this week’s summit … I can think of nothing more effective.”

S&P called the summit “an opportunity for policymakers to break the pattern of what we consider to have been defensive and piecemeal measures to date, overcome individual national interests and preferences, and advance a credible response to the crisis that would go far towards restoring investor confidence.”

“If the response of policymakers is not viewed by investors as robust, we believe market confidence could take another, possibly steep, drop downwards,” that could force a downgrade of the 15.

“The failure to present a strategy that would in scope and content address investors’ concerns could weigh more heavily on financing conditions than what we observed in the aftermath of previous summits,” it said.

That would significantly raise the risk of recession, the ratings firm added.

Juppe told RTL radio that a plan to toughen EU budgetary rules “is precisely the response to one of the major questions of this ratings agency (S&P) that mentions the insufficiency of European economic governance.”