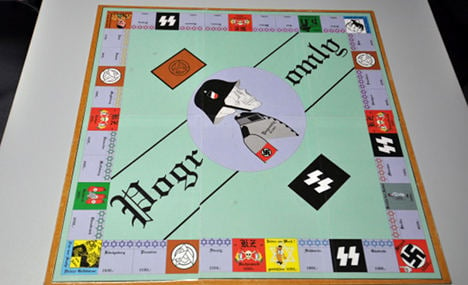 Uwe Mundlos, Uwe Böhnhardt and Beate Zschäpe supposedly made several dozen copies of their gruesome invention “Pogromly” in 1997, selling it in the neo-Nazi scene for 100 Deutsche marks (€50), according to a report in the Frankfurter Allgemeine Zeitung newspaper.

Photos of the game provided to The Local by the Thuringia state office of the German domestic intelligence agency, the Verfassungsschutz, show the starting point of the game has a giant swastika on it.

Rather than train stations there are concentration camps on sale, complete with burning Israeli flags. The currency used is Reichsmarks. The game also includes gasworks and depictions of Hitler and evil-looking Jews.

Mundlos killed Böhnhardt and then shot himself after being confronted by police last month and Zschäpe later turned herself in.

At least three different suspected far-right extremists have since been arrested on suspicion of association with the cell, which is believed to have killed nine people of foreign background between 2000 and 2006 as well as a police officer in 2007.

Authorities have been in possession of the ‘Pogromly’ since at least 1998, after confiscating professional looking copies of the board game game when they uncovered a bomb-making operation the cell was running, according to the FAZ.

The trio later turned to armed bank robberies to finance their lives and terrorist activities.