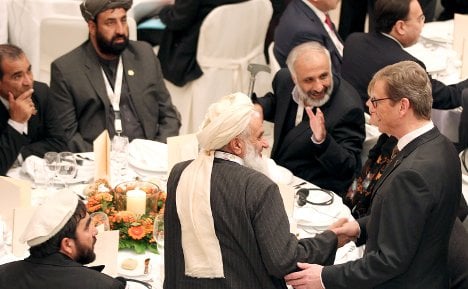 But the boycott of two crucial players – Pakistan and the Taliban – has dampened hopes of success for the one-day conference.

A decade after a meeting in the city put an interim Afghan government in place after the Taliban’s ouster, the country is again the focus of tricky international talks in the former German capital.

“We will not forget Afghanistan after 2014,” German Foreign Minister Guido Westerwelle said at a dinner on the eve of the conference with guests including Afghan President Hamid Karzai and UN Secretary General Ban Ki-moon.

“Our engagement will last. But it will be different. It will focus more on reconstruction and development.”

Other high-profile participants will include US Secretary of State Hillary Clinton, Afghan Foreign Minister Zalmai Rassoul and his Iranian counterpart Ali Akbar Salehi.

There are around 140,000 international troops in Afghanistan and all NATO-led combat forces are due to leave by the end of 2014, when Kabul will assume responsibility for the country’s security.

But Pakistan and the Taliban – both seen as pivotal to any end to the bloody strife in Afghanistan – have both bowed out of the Bonn conference.

US President Barack Obama phoned Pakistan’s President Asif Ali Zardari on Sunday to express his regrets over the “tragic loss”, saying the casualties were not intentional, but Islamabad remained unmoved.

Clinton, who arrived Monday, has voiced regret over the boycott because she said Pakistan had a stake in a secure and stable Afghanistan, but aides travelling with her denied Pakistan’s absence would undermine the conference.

“I don’t think it will impact the conclusions of the conference in any way,” a senior State Department official told reporters on condition of anonymity during the flight to Bonn from Washington on Sunday.

“We’re all anticipating they (the Pakistanis) will continue to play an important role moving forward. I wouldn’t read too much into their non-appearance tomorrow,” the official said.

Germany calls Pakistan’s pull-out a “setback” for the meticulously planned conference. But organisers say they are confident Islamabad will also see itself as committed to the principles laid out in the meeting’s final declarations.

The Taliban, leaders of the country’s brutal, decade-long insurgency, have also stayed away, saying the meeting will “further ensnare Afghanistan into the flames of occupation”.

National reconciliation, along with the transition to Afghan sovereignty and international engagement after 2014, had originally topped the conference’s agenda.

But such hopes soured after tentative contacts collapsed and the September assassination of Karzai’s peace envoy, former president Burhanuddin Rabbani, which was blamed on the Taliban, derailed any prospects of progress.

Karzai, who is chairing the conference, accused Pakistan in a German interview, of undermining overtures to the Taliban.

“Up until now, they have sadly refused to back efforts for negotiations with the Taliban,” he told Monday’s issue of news weekly Der Spiegel, as he called on the West to commit to helping Afghanistan for another decade.

Officials from the primary delegations spent much of the weekend thrashing out the conference’s written conclusions, which are expected to set out “mutual binding commitments” by Afghanistan and the international community after 2014.

Sources said they would neither include specific aid nor troop pledges but rather outline what role the country’s allies could play as it seeks to steer towards stability.

Germany has already said it will leave some forces in the country to help train Afghan troops.

Diplomats say Western countries will in particular seek to allay Kabul’s fears that a looming global recession will distract them from the enormous challenges facing the strife-wracked nation and prompt a rush for the exit.

Suicide bombings, improvised explosive devices and other attacks already kill hundreds of civilians every year, and many Afghans worry that security will worsen after 2014, or even that civil war could reignite.

Twenty-year-old Shamim Assir from Logar, south of Kabul, told AFP last month he was ready to turn his back on his country.

“The security situation is worsening day after day, there is no work for us, we cannot even roam around freely, there is no future,” he said.