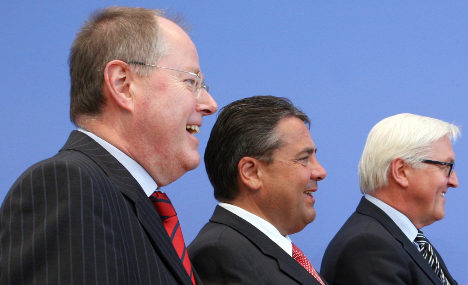 Speaking to the Bild am Sonntag newspaper, Steinbrück, said that if current coalition between the conservative Christian Democrats (CDU) and the pro-business Free Democrats (FDP) were to fall apart then new elections were the only alternative.

Steinbrück served as finance minister in a grand coalition of the CDU and the SPD between 2005 and 2009. The two parties worked well together, whereas the current government has been marked by bickering from the outset.

“The SPD will not enter a Merkel cabinet, that is agreed,” said Steinbrück, who is regarded as a possible Chancellor candidate for the federal elections in 2013.

The SPD began its three day party conference in Berlin on Sunday. The issue of who will lead the party into the next national elections is not officially on the programme.

Nevertheless, the performances of the three leading members – party leader Sigmar Gabriel and parliamentary leader Frank-Walter Steinmeier as well as Steinbrück – will be watched closely.

The party is hoping to present itself in a strong light as a party capable of governing after the next election. Their preferred coalition would be with the Greens.

Ahead of the conference Steinmeier had called on the party to avoid a move to the left. “The party is well advised to continue to keep to the centre,” he told the Frankfurter Rundschau newspaper. Gabriel and Steinbrück have also warned against a leftward shift.

Despite such appeals, there are expected to be proposals from the left-wing of the party during the conference for more taxes on the rich and a reverse in cuts to pensions.