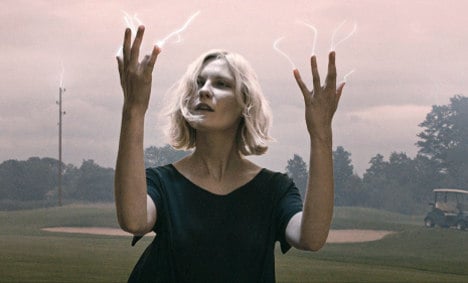 The controversial Danish filmmaker, who was kicked out of the Cannes Film Festival earlier this year for making jokes about Hitler, did not attend the ceremony. Instead he sent his wife Bente Frøge to accept the award on his behalf.

“I should say from Lars that he has no message for you since he has decided not to make statements any more and I really don’t know why,” she said. “But he asked me that I should salute you in a very kind and friendly way.”

“Melancholia” stars Kirsten Dunst as a bride getting married in the romantic castle belonging to her sister, played by Charlotte Gainsbourg, as a planet called Melancholia heads in a collision course for Earth.

The film also won the awards for Best Cinematographer and Production Designer. However, Dunst, who picked up the Best Actress award in Cannes, lost out in Berlin to Tilda Swinton, who won for her role in “We Need to Talk About Kevin.”

“The King’s Speech” was the other big winner of the evening, picking up three prizes, including best actor for Colin Firth who played the stuttering King George VI.

“I’m absolutely thrilled to get this,” said the film’s director Tom Hopper, as he accepted the People’s Choice Award. “I think it’s great that we’re standing here today celebrating the ideal of the European project through the film industry.”

German veteran director Wim Wenders won in the documentary category for his film “Pina” about the late choreographer Pina Bausch. The film is Germany’s entry for the best foreign film Oscar and is also shortlisted for best documentary.

“The Artist,” considered by many a top candidate for this year’s Best Picture Oscar, only won one award, Best Composer, for Ludovic Bource.

The awards were voted on by more than 2,500 members of the European Film Academy.