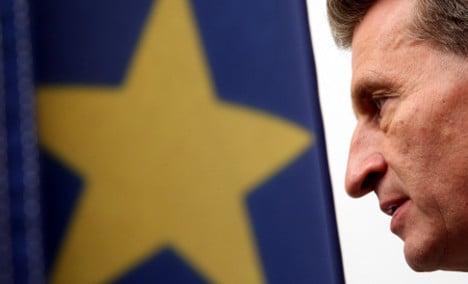 “One cannot categorically rule out eurobonds. They may become necessary,” Oettinger told Die Welt newspaper in remarks published on Saturday. The energy commissioner, who is a member of Chancellor Angela Merkel’s conservative Christian Democrats (CDU), told the paper that eurobonds could “create a key building block next to the consolidation measures and the changes to the Lisbon Treaty.”

Oettinger expressed the hope that Merkel would yet change her position. He said no one laid all their cards on the table at the beginning of negotiations.

Germany is laying out its position ahead of a crucial summit next Friday. EU leaders will gather to try to hash out a solution to the eurozone’s spiralling debt crisis, which has seen some member states facing unsustainable borrowing costs as investors flee eurozone sovereign bonds.

Oettinger said he was in favour of limited changes to the treaties so that those who broke rules on deficits would automatically face sanctions. “A facility must be created to call on the European Court of Justice,” he said.

However, he warned against changing the role of the European Central Bank (ECB) to emulate that of the American Federal Reserve. The ECB’s current role is limited to ensuring price stability and fighting inflation. Germany has long resisted calls to use the ECB as a lender of last resort. It fears that if the bank were to create new money to purchase government bonds from at-risk countries it could lead to rampant inflation.

Meanwhile, Finance Minister Wolfgang Schäuble reiterated his firm rejection of eurobonds. Speaking to the Passauer Neue Presse, he insisted that pooling bonds was something that the European treaties excluded. “There can be no eurobonds. The German economy would be overburdened if we had to guarantee the debts of other states.”

Instead Schäuble wants to see the rules of the Stability and Growth Pact enforced. In particular debts must not be allowed to rise above 60 percent of gross domestic product, he said.

She also ruled out using the ECB as lender of last resort. Instead she said Germany would push for a “fiscal union” which could impose tough budgetary disciple on the eurozone states.