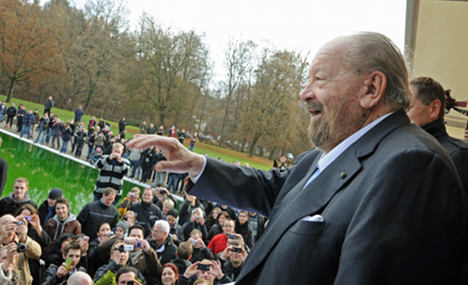 On a visit to Schwäbisch Gmünd to officially christen the swimming pool that he had once swum in as a child on Friday, the 82-year-old Italian action star said simply: “I am deeply touched.”

Hundreds of of reporters and curious onlookers turned out for Spencer’s visit to Schwäbisch Gmünd, where he was feted by city leaders throughout the day. He was scheduled to appear at a later book signing and panel discussion.

Best known for his films with sidekick Terence Hill, Spencer acted from 1959 to the early 1990s in more than two dozen action movies that were quite popular in Germany. He also had a short sporting career in his early days, even competing as a swimmer in the 1952 Olympic Games. It was during this time that he swam in the Schwäbisch Gmünd pool that now bears his name.

But he once again shot into the public consciousness last summer when internet pranksters started a campaign to name a new local tunnel after him when city leaders asked for the public to vote for names online.

More than 20,000 people – most of them from outside the city – voted for Bud Spencer’s name to grace the tunnel. But at a sometimes tumultuous city council meeting in July, city leaders decided to name the pool after him.

They later declared that the tunnel would be called the Gmünder Unicorn Tunnel, because the mythical animal is part of the city’s emblem.