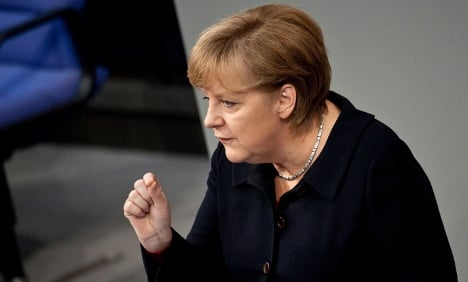 “We are not only talking about a fiscal union, we are beginning to create it,” she said in a keenly awaited speech to parliament, adding it would be a “fiscal union with strict rules, at least for the eurozone.”

Merkel said the last gruelling months, packed with market turmoil, the threat of Greek default on its towering debts and political strife in the European Union, had focused minds.

“Anyone who had said a few months ago that we, at the end of 2011, would be taking very serious and concrete steps toward a European stability union, a European fiscal union, toward introducing (budgetary) intervention in Europe would have been considered crazy,” she said.

Merkel was laying out what she said were the goals of Germany, the EU’s top economy, ahead of a crunch summit in Brussels next week. She will hold talks with French President Nicolas Sarkozy on Monday to hammer out a common position ahead of the gathering.

Sarkozy declared on Thursday evening the eurozone was facing a critical few weeks.

In a landmark speech Friday in front of 5,000 cheering supporters, Sarkozy warned that the developed world was entering a “new economic cycle” dominated by debt reduction, heralding tough times ahead for jobs and business.

“Europe will have to make crucial choices in the weeks to come,” he warned in the southern port city of Toulon, adding: “Europe is not a choice, it is a necessity, but it needs to be rethought, refounded.”

“We must confront with total solidarity those who doubt the stability of the euro and speculate on its break-up,” he declared.

“France is fighting with Germany for a new treaty. More discipline, more solidarity, more responsibility … true economic government” he said, urging members to adopt a “Golden Rule” obliging them to balance their budgets.

The French leader was to meet Britain’s Prime Minister David Cameron on Friday to discuss the crisis and then Merkel on Monday to agree a joint Franco-German proposal to save the single currency.

Then, on December 8 and 9, all 27 European leaders will meet at the EU Summit in Brussels, a meeting which some observers have billed as their last chance to restore the credibility of eurozone economic governance.

The stability of the European economy has been rocked by a sovereign debt crisis spreading from the eurozone’s highly indebted peripheral states like Greece and Ireland towards major economies such as Spain and Italy.

France has also seen borrowing costs rise, and ratings agencies have warned that its prized Triple-A status is at risk – a potential humiliation for Sarkozy six months before he is due to seek re-election.

European leaders have struggled to convince markets that they will be able to stave off the risk of a massive default that could bring down banks, cause a global credit crunch and bring down their single currency.

Next week’s Brussels summit is now seen as key to halting the crisis, but there have been reports that the eurozone’s two biggest players — France and Germany — are at odds over which course to take.

French officials have been pushing for the European Central Bank to become the eurozone’s lender of last resort — effectively permitting it to print money in order to buy up member states’ debt and relieve fiscal pressure.

But this is anathema to Germany, which nurses grim memories of inter-war hyperinflation and insists the ECB should stick to its price stability mandate.

Sarkozy appeared to partially concede this point, saying the bank should remain “independent” but added that he was sure that it would act.

“It is for it to decide how and with what means. That’s its responsibility. No one doubts that it will meet it, and I welcome what it has begun to do,” Sarkozy said, in comments that observers said risked riling Berlin.

ECB chief Mario Draghi had already warned Thursday the central bank cannot act beyond its mandate — although he left the door open to a more activist role if states agreed tougher fiscal rules of the kind Merkel wants.

But Merkel on Friday once again ruled out eurobonds, a proposal to pool European debt to keep a lid on borrowing costs for member states, which European Commission chief Jose Manuel Barroso formally tabled last week.

the crisis has not understood the nature of the crisis,” she said.

Some EU members have opposed the idea of a new treaty, which would take time to agree and might trigger referendums in some countries — votes that governments would struggle to win against a backdrop of economic austerity.

Sarkozy said the existing Maastricht Treaty had proved “imperfect” as it allowed states with lax budget discipline to escape punishment. Germany is pressing for automatic sanctions to be imposed on backsliders.