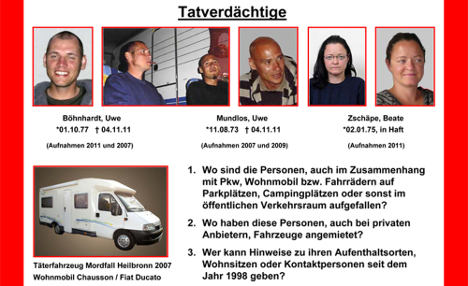 The self-styled National Socialist Underground (NSU) carefully devised their attacks, in which they killed nine shop owners and a policewoman, said Jörg Ziercke, head of the Federal Criminal Police (BKA) at a press conference.

“They didn’t want to leave anything to chance. Great preparation went into at least some of the murders,” he said, sitting in front of a table loaded down with guns recovered from the group’s flat. He said detectives had also found hand-drawn sketches of the places where people were shot, as well as road maps of how to get there.

He said work was underway to gather enough evidence to arrest the man who rented the flat in Zwickau, Saxony – yet they did not yet have enough probable cause.

“A person can say they lost their identity card, or that it was stolen and misused,” he said.

He and Harald Range, the new federal state prosecutor, appealed to the public for information about Uwe Mundlos, Uwe Böhnhardt as well as their alleged accomplice Beate Zschäpe.

Range spoke of a burning xenophobia and hatred of the state which united the three as they planned the killings of Turkish and Greek shopkeepers, as well as that of a policewoman, plus the detonation of two bombs in largely immigrant areas.

They had funded their underground lives, which included frequent trips across Germany, and multiple car hires, with at least 14 bank robberies, he said.

He said it was clear now that Mundlos had shot Böhnhardt and then himself, after they were stopped by police following one of those bank robberies earlier this year.

Zschäpe and two others suspected of being supporters are in investigative custody, while attempts are being made to arrest a third man – but the authorities are keen to identify more possible helpers.

“Böhnhardt, Mundlos and Zschäpe used different names, fake identity cards and train cards as well as fake passports while they were active. They lived in several flats, three in Zwickau. They had to have helpers and supporters,” said Ziercke.

“But there are gaps in what we know about where they were and what they were doing. They stayed in camp sites on the Baltic coast and hired many cars and bicycles. They rented 56 vehicles between 2000 and 2011.”

He said any information about where they were and what they were doing would be helpful – although his detectives were currently working through around 2,500 pieces of evidence taken from the flat, which Zschäpe is accused of blowing up shortly after Böhnhardt and Mundlos died.

“Our question to the public is, where were they, what were they doing, back until 2000 and even before that. Who saw them in car parks, on campsites, or when hiring cars or other vehicles?” asked Ziercke.