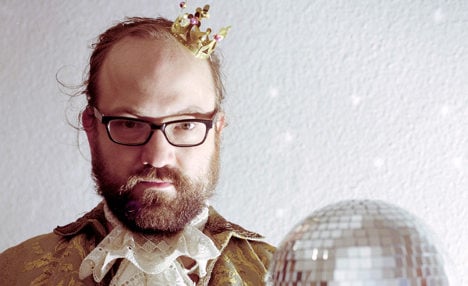 Some of the musicians performing at Worldtronics 2011 are into in the music of far away lands like Colombia and Ghana. Have a listen this week at Berlin’s House of World Cultures where radical developments in electronic music take centre stage through Sunday.

Iranian-American author Porochista Khakpour takes the mic Monday at the US Embassy in Berlin, continuing the fall literature series. Now in paperback, her debut novel Sons and Other Flammable Objects traces the trials and tribulations of an Iranian family living in the United States.

Tuesday is St. Nikolaus Day in Germany. Hooray! This holiday is the best because jolly old St Nikolaus fills all the kids boots with candy and toys. Once they’ve come down from their sugar high bring the tots over to Schloss Charlottenburg’s Christmas Market where they can ride the carousels as many times as they want for free, then sip hot chocolate in the small orangery like little King Friedrichs.

Weekend – A Different Festival For Music, Film and Arts

Artists from as near as Cologne and as far as Hawaii play contemporary pop, post-punk, electronica and experimental music this weekend at the Alta Ufa Filmpalast while classic movies like Rocky and The Wizard of Oz flicker across the big screen. Follow the yellow brick road Sunday, then rock out to Thurston Moore.

Take the family to see the mediaeval statues, paintings, and illuminated texts at the Museum Schnütgen Saturday and stay for the Advent Concert. The Ensemble Ala Aurea performs selections from The Song Book of Anna von Köln, infusing the atmosphere with the splendid solemnity of the Middle Ages.

The Cambridge University European Theatre Group has performed a Shakespeare play in cities around the continent every December for over half a century. Partake in their tradition Tuesday when the excellent student-run company bring King Lear to Frankfurt. The legendary tragedy will have you feeling a heckuva lot better about not talking to your sister about that stupid thing she did. But hey, maybe it’s time to pick up the phone. Then again, what would Cordelia do? Better go see the play first. Just don’t bring your Dad.

In 1973 Uruguay experienced a coup d’état and a pair of 11-year-olds fell in love. So goes the storyline of Spanish director Ana Díez’ film Paisito, which translates to “Small Country.” An official selection at the 2008 Malaga Film Festival, Paisito screens in Spanish with English subtitles Monday as part of the Cervantes Institute’s women in film series.

Cross cultural exchanges are an important aspect of good international relations, and music is one of the most effective ways to get people talking. Whether you give a hoot about east/west friendship or are just interested in of the moment creativity, check out Hamburg’s Klang Werktag Festival. European and Iranian artists mingle in a variety of contemporary music concerts, including a rare performance outside of Iran by the Iranian Orchestra for New Music.

Nothing says Christmas in Munich quite like the Christkindl Tram. All aglow with twinkling fairy lights and resounding with seasonal tunes, the historic streetcar makes its way around the city every December, leaving a wake of holiday cheer in its path. (Unless you’re stuck behind it during rush hour.) Embrace one of Munich’s quirky holiday harbingers this week and embark on the half-hour journey around town. Want to meet Santa? Go Tuesday.

One of the special things about the holiday season in Stuttgart is the concert series in the old castle courtyard. From local jazz choirs to evangelical church choirs, the cold winter air fills with heartwarming voices every evening right up until the week of Christmas. Patriotic Americans can wave their flags Tuesday when the United States Army Europe Soldiers Chorus sings a repertoire dear to anglophone hearts.