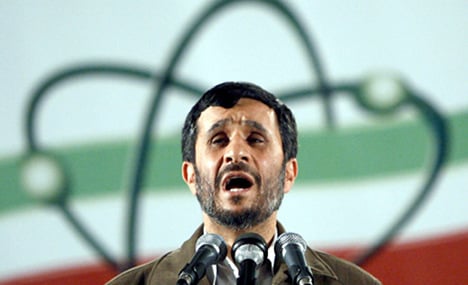 Thanking European Union countries for their “emphatic support” following the storming of Britain’s embassy in Iran, Foreign Secretary William Hague said “I hope we will agree today additional measures that will be an intensification of the economic pressure on Iran.

“Peaceful legitimate economic pressure particularly to increase the isolation of the Iranian financial sector,” he added.

German counterpart Guido Westerwelle said the aim of sanctions “is to dry up Iran’s financial sources.”

Pressed into action following the publication of a new report on Iran’s contested nuclear activity, the ministers are expected to slap an assets freeze and travel ban on a further 143 Iranian companies and 37 people.

But they remain divided over extending the blacklist to the country’s oil sector or freezing the assets of it’s central bank. Britain, France and Germany and Sweden favour oil sanctions, but with Spain, Greece and Italy significantly dependent on oil from Iran “there will be no oil sanctions” announced Thursday, an EU diplomat told news agency AFP.

“I’m sure there’ll be a discussion” on oil sanctions, Hague said. “I think there will be a variety of views, I dont know what the outcome of that is going to be.”

Hague reiterated Britain’s angry condemnation of Tuesday’s attack on its embassy and welcomed the “emphatic support” shown by EU nations, with France, Germany and the Netherlands all recalling their ambassadors from Iran.

Urging the EU’s 27 states “to ratchet up sanctions,” the bloc’s foreign policy chief Catherine Ashton said it was time “to make it clear to Iran that we are very serious.”

But holding out a hand to Tehran to resume global talks on the nuclear issue, she said “I’m still waiting for the letter” from the Iranian side following an offer to resume the negotiations.