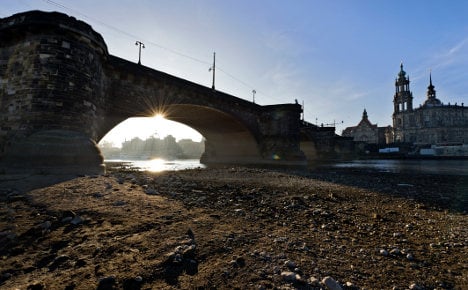 The unrelentingly dry weather has resulted in record low water levels in many of the country’s largest rivers, causing disruptions to shipping.

In the Bavarian Alps only a fraction of normal snowfall has been recorded so far, with an unseasonably high risk of forest fires being issued.

In addition to the dry weather, Germany has been unusually sunny, as a nationwide average of 95 hours of sunshine has been recorded this month. This is 75 percent more sunshine than the standard November average of 53 hours.

In the Thüringia Forest, over 156 hours of sunshine were recorded this month, a notable improvement on the last four years, which have seen an average of 43 hours of sun. This figure was topped only by the East German city of Chemnitz, which enjoyed over 164 hours of autumnal sun this November.

As December begins, however, the dry spell will be giving way to a band of rain spreading from east to west by Thursday morning. Both Bavaria and very northern areas will remain mostly dry, with many areas in the south west even experiencing a little sunshine.

“From Thursday, winter is going to try and make up for everything we missed in autumn, with rain and wind being thrown into the meteorological mixing bowl,” said Marcus Beyer of the DWD. “It will remain, nevertheless, rather mild.”

On Thursday night central and northern regions of German will be covered in a thick blanket of clouds, with intermittent rainfall. The south will cling onto some of November’s dry weather, with areas experiencing a starry night.

In the south east, temperatures will fall to zero degrees Celsius, while the rest of the country will hover at around five degrees. Stormy winds will continue to whistle across the south and south west.

On Friday rain will fall over large parts of the country, except in a few lucky areas south of the Danube. Highs of 14 degrees have been predicted for the Upper Rhine region, with the rest of the country forecast to be between seven and 12 degrees Celsius.

On Friday night the south will be hit by rain. Eastern regions, however, will remain dry. Temperatures will drop during the night, increasing the chance of a sprinkling of snow in southern hilly regions and the Alps.

Saturday is set to be a particularly rainy day, with clouds blanketing most of the country. There will be the occasional sunny spell in the south and in parts of the east. This wet weather will continue into the nighttime, easing only slightly in the southeast.

“By the weekend, the calm November weather will be well and truly over,” said Beyer.