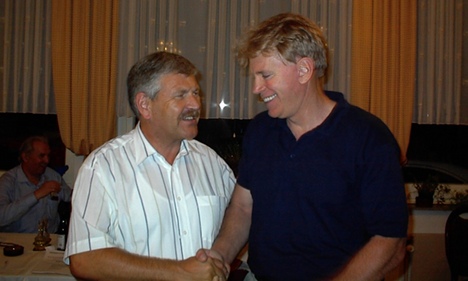 Duke, 61, is one of the United State’s most prominent racists, who has served in the Louisiana state legislature and is a former leader in the Ku Klux Klan. He has gained a huge following on the internet, where he promotes “white nationalism” and anti-Semitism.

He is said to have been living off and on for the last two years in Austria, which he has used as a base for his regular speaking appearances before extremist gatherings in Europe, including in Germany.

But according to the daily Die Welt newspaper, Duke was picked up by German police last Friday while trying to speak at a neo-Nazi gathering just outside Cologne. He was later released and has remained in Germany while authorities here institute deportation proceedings.

According to Die Welt, Duke was trying to talk to a gathering of about 60 extremists. But police had advance knowledge of the event and conducted extensive identity checks on attendees in order to disrupt it.

German authorities did not immediately comment to media on the reasons they want Duke out of Germany, but the incident comes at a sensitive time for the German government.

Amid revelations of a neo-Nazi killing squad that operated in the country between 2000 and 2006, it is facing accusations that it hasn’t done enough to stem the threat of right-wing extremists.

On his website, Duke vowed to fight the attempted deportation. He condemned the arrest and begged supporters for cash donations, writing that a “desperate fight” was in front of him.

“While most of you will be getting ready for the warmth and love and friendship and family of Christmas, I will be far from home fighting the good fight,” he wrote.