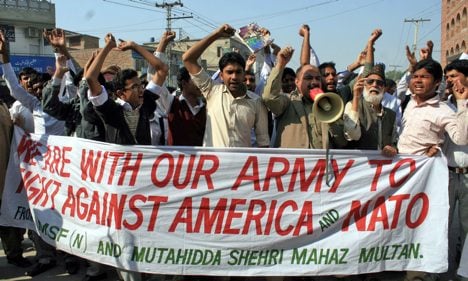 Merkel said Germany would “see what could be done to change” Islamabad’s decision to stay away from the meeting in the western German city, taken in protest at NATO air strikes which killed 24 Pakistani soldiers.

“We are both interested in constructive development of Afghanistan,” Merkel, who will open the Bonn conference, told reporters flanked by visiting King Abdullah II of Jordan.

“Which is why I consider the conference hosted by the (German) foreign minister to be very important. We always said that conflicts can only be resolved in the region and Pakistan is part of this region which is why we are very sorry that this cancellation came today.”

Merkel said Berlin still hoped Islamabad would attend the Bonn meeting, which will draw delegations from around 100 countries to discuss commitments to the war-ravaged country after the withdrawal of NATO troops in 2014.

Among the invited guests is US Secretary of State Hillary Clinton.

“I understand Pakistan’s concern about the loss of human life due to NATO troops but this should not distract from the fact that this Afghanistan conference is a very, very important conference,” she said.

“There was a loya jirga (grand assembly) in Afghanistan and there is now a very, very good chance for a possible political process. On the one hand I can understand (the boycott) but on the other, we will see what still can be done.”

Foreign Minister Guido Westerwelle, who is organising the conference, said later that Berlin was “of course” in contact with the Pakistani government over its pulling out and said it would be a “setback” if Islamabad did not attend.

“The success of the Afghanistan conference is not only important for Afghanistan but also for the entire region, for all neighbouring countries and of course and in particular for Pakistan,” he said.

Westerwelle added he understood Pakistani ire over the NATO bombing on Saturday and urged a speedy probe by the alliance to get to the bottom of how it occurred.

“You can imagine for a moment if something so horrible had happened to us and our country were mourning such a large number of victims – I ask that to be always be considered in judging decisions taken.”

US-led investigators have been given until December 23 to probe the attacks, threatening to prolong significantly Pakistan’s blockade on NATO supplies into Afghanistan implemented in retaliation for the killings.

Islamabad has vowed no more “business as usual” with Washington in the wake of the strikes. In addition to shutting its Afghan border, it ordered Americans to vacate an air base reportedly used by CIA drones and a review of the alliance.