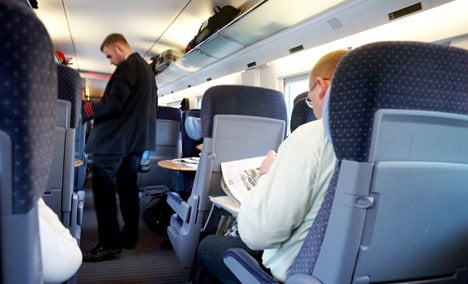 The toilet situation must be “urgently addressed,” said VCD head Michael Ziesak, suggesting the loos be cleaned during long-distance journeys. But he also said the Bahn was preparing to cut 150 cleaning jobs.

The study recruited a panel to use the German grading scale from 1 at best to 5 at worst, to rate various aspects of Deutsche Bahn during more than 1,400 trips on long-distance train journeys between April and September this year.

The cleanliness of toilets came in among the worst rated, with the panel giving the Bahn a middling rating of 2.8.

According to the study, only half of toilets on any kind of long-distance trains tested were considered clean, while only a third passed muster on the intercity trains.

The study said cleaning toilets would be one of the easiest ways to improve customer satisfaction with a minimum of effort.

Despite widespread reports of ill-mannered train personnel, those asked gave staff among the best ratings in the study – 2,1 overall.

But much of the panellists’ anger was reserved for the way the Bahn handled changes to the timetable. The report gave the company a mediocre 3.2 for how it provided information in cases of train diversions, delays or unexpected stopovers. Nearly 60 percent of the time, Deutsche Bahn didn’t adequately explain the reasons for the change.

The report comes at a time of increased sensitivity for Deutsche Bahn as it tries to avoid a repeat of last winter when bad whether prompted cancellations and delays across the country, infuriating would-be passengers.

It has said it is investing millions of euros in operational and customer service improvements.

Deutsche Bahn said it would look at the report. “Some of what the VCD addresses has already been recognized internally, particularly in regard to information provided to passengers,” a Bahn spokesman said.