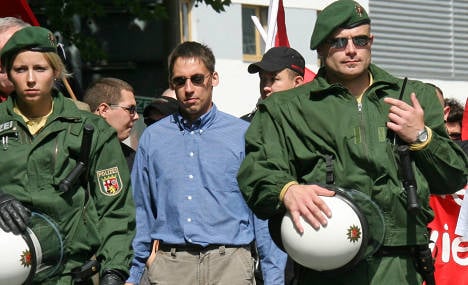 Ralf Wohlleben (in glasses) at a 2007 protest in Jena. Photo: DPA

According to a statement from federal prosecutors, the 36-year-old man was taken into custody in Jena in the eastern German state of Thuringia. The website of news magazine Der Spiegel identified him as former National Democratic Party (NPD) official Ralf Wohlleben.

The authorities suspect Wohlleben aided members of the so-called National Socialist Underground (NSU), which is thought to have killed nine people of immigrant background between 2000 and 2006, as well as a policewoman in 2007.

“The accused is strongly suspected to be an accessory in six counts of murder and one attempted murder,” the prosecutors’ statement said.

The attempted murder charge relates to a police officer who was shot and severely injured when the policewoman was killed.

Wohlleben was active in far-right extremist circles beginning in the 1990s and helped financially supporting the NSU, the prosecutors’ statement said.

He is also suspected of sending a firearm and ammunition to the neo-Nazi group through a courier in 2001 or 2002 – tacitly accepting the weapon could be used for murder, the prosecutors said.

Wohlleben is also accused of helping facilitate contact between the NSU members Uwe Böhnhardt, Uwe Mundlos and Beate Zschäpe and another alleged supporter Holger G., who is suspected of providing them money and identity documents.

Böhnhardt and Mundlos died in a mysterious shooting and fire on November 4 and Zschäpe turned herself in to police a few days later. Holger G. was arrested on November 13 and another suspected NSU supporter, André E. was arrested last week.

According to Der Spiegel Wohlleben had been suspected of involvement with the NSU for some time – his home was raided by authorities several days ago, but he said he didn’t think he would be arrested.

Wohlleben has long been a visible figure in Thuringia’s extreme-right scene, where he served as a spokesman for the NPD. He is said to have left the neo-Nazi party some years ago, Der Spiegel reported.

The Tuesday arrest, which may be interpreted as showing an obvious connection between the far-right party and the NSU, could serve as ammunition for those calling for a formal ban on the NPD.

The party has come under increasing pressure following revelations of the neo-Nazi killings earlier this month.

The NSU murders, and allegations that state security apparatuses may have ignored warning signals of violence, have shaken Germany and led to accusations that the country has ignored right-wing extremism in its midst.