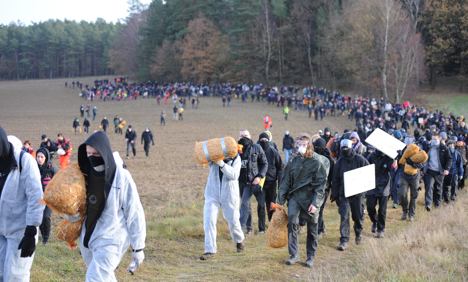 Organisers said they were expecting some 20,000 people to protest in the town of Dannenberg, where the 11 containers of reprocessed German nuclear waste being carried by the train are due to be unloaded.

those who turned out this time last year, when Germany was at the height of a

debate over nuclear power in the country. Since then – and in the wake of March’s nuclear disaster in Fukushima in Japan – the German government has decided to abandon atomic power. This appears to have dampened the protests.

After the waste is unloaded in Dannenberg, it will then be transported by heavy goods trucks for the final 20 kilometres (12 miles) to Gorleben, where it will be stored.

So far, a number of largely peaceful protests have slightly slowed the progress of the train since it left Normandy in France on Wednesday. Activists blocked the train tracks at the town of Neunkirchen Friday afternoon where the train stopped for five hours to change engines and television pictures showed activists removing ballast stones from under the tracks in a bid to slow the train’s progress.

There were isolated outbreaks of violence on Thursday and Friday in Metzingen, near Gorleben, where 10 masked people attacked police with bricks and smoke bombs but managed to escape arrest, said an AFP news agency photographer at the scene. Police said unknown assailants had set fire to two patrol cars.