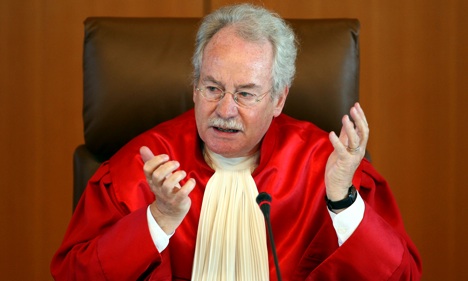 But those behind a new petition should take care not to re-create the mistakes made in the earlier case, Winfried Hassemer, the ex-head of the Germany’s Constitutional Court, told the Frankfurter Rundschau newspaper Saturday.

A recent poll showed that more than three-quarters of those surveyed want the NPD outlawed.

Hassemer led the court when it ruled in 2003 that the NPD could not be banned because the German government had used party members as informers. A minority of three of seven judges voted against the ban because they couldn’t be sure that neo-Nazi material had been produced by actual party members, Hassemer said.

“The evidence wasn’t clean,” Hassemer said. “It was possible that some NPD writings that were a violation of the constitution were not written by NPD members, but by informers. This muddiness eliminates the chance of a fair proceeding.”

But the former judge said the court back then did not categorically rule out an NPD ban. He refused to outline in detail what needed to be in a new application saying, “I’m not the federal government’s legal advisor.”

But given what went wrong last time, those behind a new petition should take care to separate out the involvement of government informers from other party members.

Asked whether he, as a citizen, would favour a ban, Hassemer said, “I personally am not a fan of legal methods that have only a symbolic effect. The ability to ban a party is an indispensable, but long-term concept that won’t immediately change the problems that we find ourselves in at the moment.”